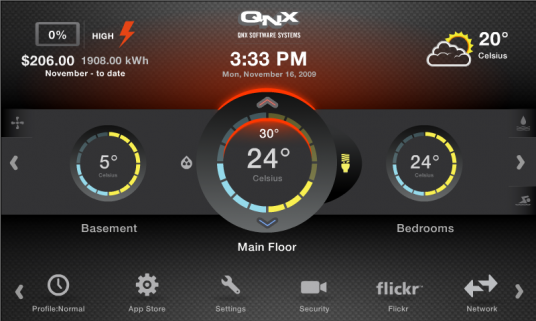 Following up on their acquisition of Viigo, RIM has picked up an Ottawa developer named QNX, who used to be owned by Harman, of Harman/Kardon audio fame.  QNX’s work specializes in embedded technology, but ranges wildly from there, including automotive, health industry, aeronautics, and lots more. With all that variability, it’s hard to tell exactly what RIM is going to do with these guys – the press release does state explicit interest in “in-vehicle audio and infotainment systems” and “intelligent peripherals”. The BlackBerry Bluetooth Stereo Gateway and Car Visor Speakerphone are both prime examples of RIM’s burgeoning interest in connected home systems, but QNX has the capability to take them even further.

Above is a screenshot of a touch application made by QNX for their “Smart Home in a Box”, built primarily using Flash and OpenGL, which are both technologies that RIM has been aligning themselves with more and more recently. Wouldn’t it would be cool to see something like this on a BlackBerry Storm? Clearly there’s a good fit here between the two companies, but the really interesting part of this acquistion will be the products that QNX makes for BlackBerry.

Hey Rogers BlackBerry Bold 9700 users... here's some awesome news for you! As of this very moment, you can now...