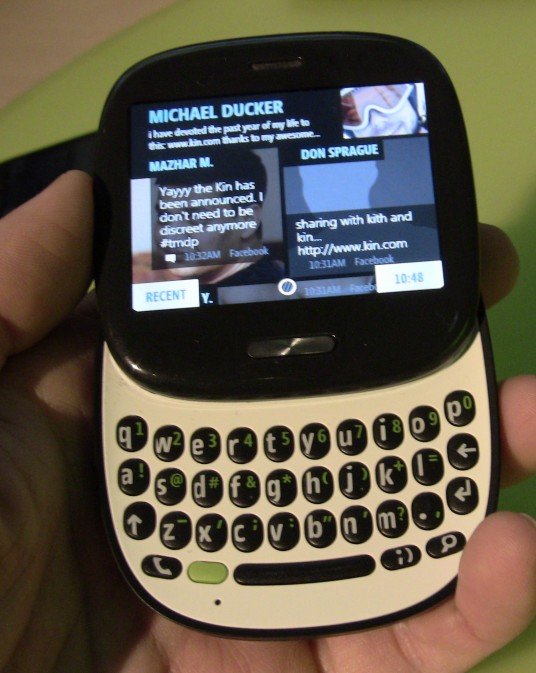 As expected, Microsoft went all social on us with the introduction of its Kin devices, which were the oft-leaked Project Pink phones. From now on, Microsoft’s Pink phone lineup will be known as Microsoft Kin phones.

Both of the former Microsoft Pink devices are made by Sharp and can be considered the next generation of the Sidekick. The handsets fit mainly into the feature phone category but there are enough social-networking features to make you forget that there won’t be an application store. First off, the main home screen is called “Loop,” and it provides a stream of all your e-mails, text messages, and social network updates from Facebook, MySpace, etc. Think of this as Microsoft’s answer to MotoBlur.

There’s also a feature called “Spot” that tries to make it easier to share content with your friends. There’s an omnipresent dot on the bottom of you screen and you can simply drag videos, photos, web pages, etc. on the Spot, and then drag the friends you’d like to share it with via SMS or e-mail. One of the cooler features is “Kin Studio,” which will automatically upload your geo-tagged photos and videos to the cloud. Getting photos off my phone isn’t exactly hard but it can be a pain to do or to remember. This service will throw all your photos online automatically and display these pics in a time line-based interface.

The Kin 1 is the lower-end device and it was aptly code-named “Turtle” because it has a Pre-like shape and sliding mechanism. The Kin 1 rocks an operating system that has Windows Mobile at its roots, but Microsoft is not marketing or talking much about the OS. It has a Tegra 1 chipset, capacitive touch screen with QVGA resolution , full QWERTY keyboard, a 5-megapixel camera, stereo Bluetooth, FM radio, integration with Zune for media playing (hello Zune Pass on the go) and 4 GB of internal storage. Microsoft said the relatively-puny amount of storage shouldn’t be a problem because of the cloud-based nature of the device for photos and media – Kin automatically uploads photos and videos to the Kin Studio cloud-based web interface, which serves as backup and remote media access portal. I agree with this to a certain extent but feel it would have been nice to get more memory out of the gates just in case.

As far as in-hand feel is concerned, the Kin 1 makes good on its goal to be a super-compact handset designed for one-handed use. The keyboard reminds us of the Hiptop/Sidekick handsets of yore, with a nice curvature and slight concavity that makes it comfortable yet compact – key placement is a little far apart for our tastes, but tactile feedback is superb. The slide mechanism has a confident spring-assisted feel, but we can see it getting loose and jiggly with enough wear and tear. The camera shutter button placement is a little awkward – it’s placed on a downward-sloping edge, making it somewhat cumbersome to depress without fumbling with the phone. The recessed 3.5mm headphone jack shouldn’t pose any problems, but certainly looks a little funny compared to the rest of the smooth lines and flush surfaces of the Kin 1.

The rear of the phone is coated in a matte, rubberized finish that gives the phone good tactile feel. You also get the sense that the operating system is working in decent harmony with the processor. We’re not told how fast the Tegra 1 processor is running in the Kin 1, but the idea is that it doesn’t matter if the UI performs well and hiccup-free.

Overall, the Kin 1 is better than a featurephone, but won’t satisfy those with a real need for smartphones. The snazzy UI, powered by NVIDIA’s Tegra 1 chipset, reminds us a bit of Windows Phone 7, and it performs well. Screen rotations were a bit choppy, but the UI in general performed smoothly and as expected. It’s no iPhone UI, but it’ll do for the Kin lineup.

Keep in mind, that there’s no calendar, no instant messaging, no app store, and there’s no way to customize the device. If you need a real smartphone, look elsewhere. If you need a socially-connected featurephone with the chops to handle all your photo and video needs, the Kin phone is for you. Check out the Kin 2 hands-on coverage here!

Microsoft launched the pair of Pink phones that had been rumored for months. But, instead of going with the confusing...