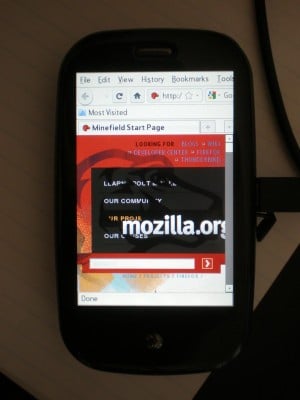 Firefox has been running on the Nokia N900 for some time now and is coming soon to Android, but we have yet to see it find its way to any other platforms yet. Well, the mobile browser has been shoehorned into a Palm Pre, thanks to a Mozilla developer named Dave Townsend. Before you get excited about trying this out, the browser still needs some work, including the mobile-optimized Fennec user interface, and some debugging regarding inexplicable hang-ups that require a battery pull to get through.

Despite the slow movement on Firefox Mobile, it’s still the subject of a fair bit of excitement, thanks largely to the Awesome Bar, which, like the desktop version, sends you to immediately pertinent websites without having to type a URL. Without question, add-ons are what made the full-fledged Firefox popular, and the possibility for a similar ecosystem of apps on mobile will have a lot of appeal for folks who generally just stick to their native smartphone browser.

The project is entirely hobbyist and by no means endorsed by Mozilla, but the fact that there’s someone there still tinkering with other platforms, and that the hardware can technically handle the awesomeness of Mobile Firefox. To keep tabs on on Tonsend’s work, head over to Oxymoronical.

HTC mulling its own operating system

After years of relative obscurity, HTC has become a powerful player in the smartphone space. But without its own operating...