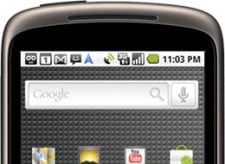 This latest bit of Nexus One news comes to us all the way from the “land of rumors,” and should be considered with guarded skepticism. We’re hearing shaky rumors, dubious and unconfirmed as they are, that the Google Nexus One Android phone will soon be getting an over-the-air update to its firmware. Word on the street is that the OTA update will hit N1 smartphones within the next few days.

There’s no mention of whether or not the alleged update will be a minor bug-fixing update, or if it signals the arrival of the Android 2.2 OS update (codename: Froyo). Google recently owned up to the fact that their Android 2.1 OS update for the Motorola Droid causing the new image gallery to show degraded image quality, so it’s possible that Google is getting ready to give those users an update that will increase image color-depth.

Above all, though, this is just a rumor. Take it for what it is and pray to whatever god you pray to for Google to unleash Android 2.2 “Froyo” on Nexus One users within the week. Crossing. Fingers. Now.

Google will make Goggles a platform

Right now, Google Goggles is a neat show-off application for your Android device but the search giant has big plans...