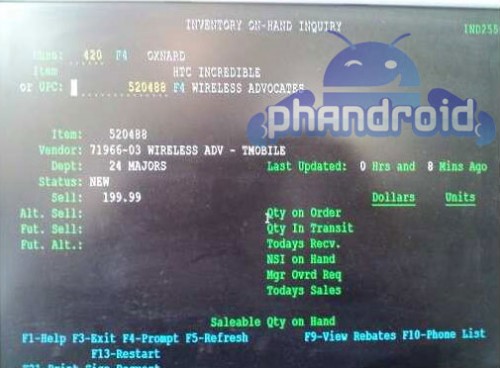 The HTC Incredible has just landed on the Verizon website, as coming soon, and has been anything but kept secret. The beefed up Nexus One, or Desire is obviously bound for Big Red, but now some are saying that the device may be coming to T-Mobile via Costco.

This is pure rumor at the moment, but it looks like the Incredible was spotted in the Costco system, and it indeed says that it is a T-Mobile device. This would be a great addition to the T-Mobile line up, as most of their phones lack a certain something. Power. The Nexus One is available for T-Mobile, sure, but not in the way we’d like (only through Google’s online store). Hopefully, since accessories have started to pop up at the stores, we may actually see the device in stores sometime soon, but it looks doubtful.

The Incredible bests some of the best Android phones out on the market today. With more internal memory – 8 GB to be precise –  and an 8-megapixel camera (opposed to the 5 megapixel cameras found on many Android devices) the Incredible is in fact, pretty incredible. The Incredible also sports HTC’s custom Sense UI. If this device does eventually come to T-Mobile, it would make it the second HTC Sense phone to come to Magenta. The upcoming MyTouch Slide coming in first.

The introduction of this device on T-Mobile would surely make it one of the best phones that has ever been offered from the 4th largest US carrier. The only rival? Another HTC phone, the HD2. While the HD2 may be selling very well, Android is more appealing these days. Plus, even though HTC did a wonderful job covering up all the Windows Mobile on the HD2, it’s still a Windows Mobile. HTC’s new ‘Droid Eris’ should have no problem flying off shelves, where ever it is sold, or whatever it’s up against.

So anyone holding out for the Incredible? If T-Mobile doesn’t end up getting it, would it be worth switching to Verizon for?

US Cellular to get HTC Desire?

The HTC Desire is one of the most sought after Android devices to date that is available today. Up until...