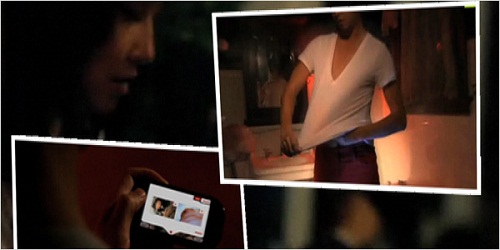 Consumer Reports is calling out Microsoft for its Kin ads because it’s “creepy” that one ad apparently shows some hip dudester sending pictures of his chest to some equally hip lady.

The video, on a promotional site for the new phones, includes a downright creepy sequence in which a young man is shown putting a Kin under his shirt and apparently snapping a picture of one of his naked breasts. The breast is then shown on the phone’s screen, just before the guy apparently sends it to someone. Next we see the face of a young woman, seemingly the recipient, with an amused expression on her face.

You can watch the whole ad here if you want to see the context. I don’t think this should cause too much outrage but it is interesting that stodgy old Microsoft is encouraging you to sext. I guess the major problem I have with the Kin devices is that it’s an uncool company desperately trying to market to hipsters who don’t want or need a smartphone, but still want all the social networking features and the ability to send pics of your sweaty chest on the go. Tone-deaf marketing aside, I don’t know how big of a market this will be because of the growth of smartphones and the appeal of quick-messaging devices due to the lack of a data plan.

Lame, lame stuff, but some of the hardware’s not too bad. We had a chance to get intimate with the Kin 1 and 2 and both felt pretty good. The Kin 1’s unique styling felt solid in the hand but you pine for a bigger screen. The Kin 2 has a better screen, solid keyboard and sports an 8-megapixel camera that can record in HD video. Check out the video below for a better breakdown of Microsoft’s super duper hip cat phones.

[Via MobileCrunch and Consumer Reports]

On top of location-based check-ins, Twitter's CEO has mentioned at the Chirp conference that they will have an official Android...