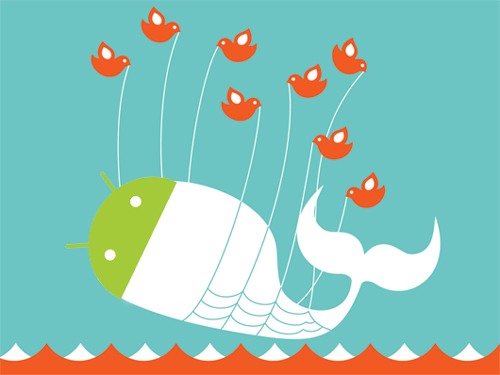 On top of location-based check-ins, Twitter’s CEO has mentioned at the Chirp conference that they will have an official Android application, potentially stealing some limelight from the third parties who have been working hard to create their own clients. This seems like a natural move, given Twitter’s recent acquisition of Tweetie, which will soon become the official Twitter for iPhone application. Of course, RIM has made the Twitter for BlackBerry app, which has recently gone public, showing that Twitter could just as easily work with, say, Google, as they could acquire a popular developer, like Twitdroid or Twicca, to create the Android app.

Developers who have been doing well selling these clients may get a little bitter about being shouldered out by the very social network they’ve been supporting with their products, but Twitter has been trying to be gentle about the whole thing. The company line so far has been that Twitter is trying to avoid confusing new users with a flood of Twitter clients by having single, official presences in the app markets, but I’m tempted to think that Twitter would need to take control of the client application to ensure those brand new sponsored tweets find their mark. We’ve already seen this pushiness with BlackBerry and their support of only the official retweet, with no quoting or editing. At this point, it feels inevitable that in time, Twitter will take control of picture services, URL shorteners, and fill any other gaps it may have, essentially cannibalizing the developers who have flocked to them and given them these feature ideas in the first place. Unfortunate maybe, but it looks like that’s the cost of progress.

The good folks at Dictionary.com have recently updated their Dictionary and Thesaurus app for BlackBerry to version 1.1.0! The new...