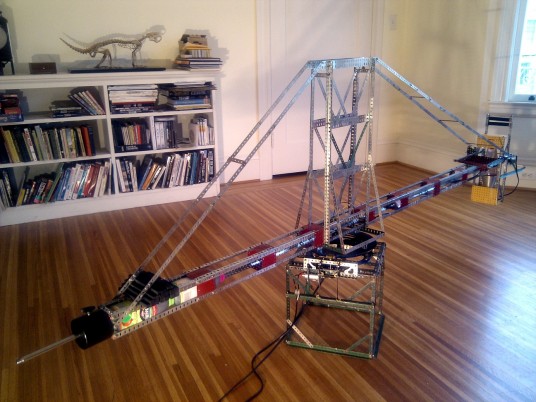 Fancy yourself a geek, do you? Well, consider your geekiness outdone by Neil Fraser. Armed with a Google Nexus One and a little too much free time on his hands, Fraser set off to answer the question of how a lava lamp would work on Jupiter. Would the lava lamp still work correctly? Would the wax balls still rise to the top of the lamp? Would the wax bubbles be smaller or larger in size? Those were all questions that Fraser wanted to answer – what with Jupiter’s 2.3G gravitational field (2.3 times the strength of Earth gravity). This particular uber-geek strapped his Nexus One to a home-made centrifuge, alongside a lava lamp, and recorded the whole experiment on video.

We don’t know about you, but this just gets our geeky blood going. The video shows the Nexus One reporting 2.0G during its centrifuge run. Fraser explains that the measurement actually calculates to being 3.0G (3 times the force of Earth gravity), due to a bug in the calibration of the accelerometers in the N1. Despite being subjected to gravitational forces higher than what you’d encounter on Jupiter’s surface, the “trippy” lamp continued to function (Coriolis currents notwithstanding). The wax still rose to the top of the lava lamp, but bubble size was a bit random and chaotic.

So, there you have it. The Nexus One has just helped the geek world settle the debate about how a lava lamp would work on Jupiter. Bet you didn’t know your Google N1 could do that.

[Via: Neil Fraser and Coolsmartphone]

A User Agent Profile for an unannounced LG phone, the P950, has bubbled up, revealing little more than a model...