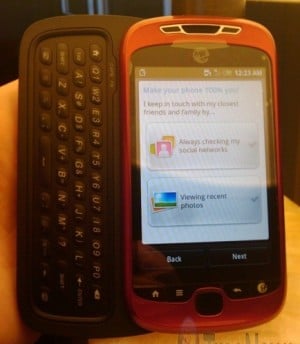 You know how the HTC-made T-Mobile MyTouch 3G lacks a physical keyboard? It might be the mid-range king of Android phones at the moment, but the lack of hard keys for tapping out long-winded emails could be a deal breaker for some. That’s where the T-Mobile MyTouch 3G Slide (codename: Espresso) comes in – it’s got all the same Android-y goodness of the MT3G, but it adds a side-sliding QWERTY keyboard to the mix. We’ve seen leaks of the MT3G Slide here and there, but have so far been left to conjecture about its spec-sheet. Well, today we get the lowdown on the MT3G Slide’s specifications, and it’s impressive to see a mid-range Android phone packing a decent feature set.

The T-Mobile MyTouch 3G Slide apparently features a display that looks to be about the same size as an iPhone 3GS display – somewhere in the neighborhood of 3.5 inches in the diagonal. It’s powered by a 600 MHz ARM CPU that plays off of 512MB RAM and 512MB on-board storage. The camera is a 5-megapixel autofocus unit with an LED flash. The retail packaging bundles an 8GB microSD card. And, finally, the MT3G Slide runs on Android 2.1 (as expected). But, the best part is that the MT3G Slide uses HTC’s custom Sense UI (which includes multi-touch support) to cover up the blandness of the vanilla Android UI.

Unfortunately, the lower clock-speed of the MT3G Slide’s processor means it won’t be able to run the Android 2.1 OS Live Wallpaper feature. That means you won’t be able to use an interactive Google Map as your wallpaper, like we do on our Nexus One.

Is this Motorola’s next Android handset?

Another day, another Android form factor from Motorola. As you can see from the picture below, this latest smartphone looks...