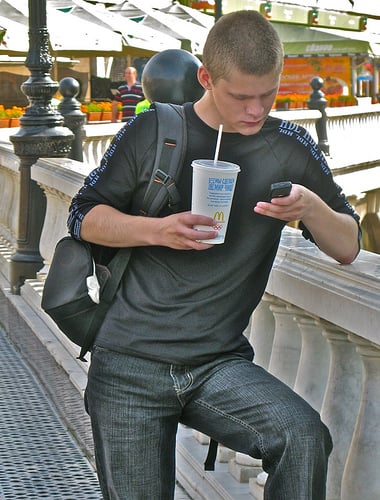 Here’s a shocker: teenagers love to text each other. Thanks to every operator in the nation offering unlimited text message packages for a nominal monthly fee, text message use has sky rocketed among teenagers. In a recent study done by the Pew Research Center that involved a sample of 800 teens between 12 and 18 years old, researchers found that 54% of teens text every day as of September 2009. This figure is up, way up, compared to the 38% found in February 2008.

Most shocking of all is the fact that half of all teenagers send and receive over 50 text messages per day, 1 in 3 go through over 100 per day, and 15% use more than 200 text messages every single 24 hours! On the opposite side of the spectrum you have 22% of teenagers using between 1 and 10 text messages a day. We’ll label them the crowd without friends.

And oh yea, that stereotype that no one calls each other anymore? That’s not the case with teens. A typical teenager receives 5 calls per day, with white teens making or receiving an average of 4 calls a day, while black teens make or receive 7 calls per day. What else are teens doing with their phone?

For more interesting stats, like 64% of parents look at the contents of their children’s mobile phone, read the report over at Pew.