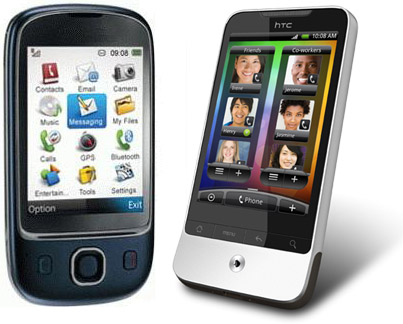 As India keeps growing its economy, we see more and more advanced devices being announced for the country’s ever-growing mobile phone market. Today we bring you the story that involves the launch of two all-touchscreen handsets for the Indian market.

First comes the HTC Legend, usually known as the Hero 2, which comes with Android 2.1, HVGA AMOLED display, optical trackpad, HSPA and WiFi connectivity, 5-megapixel camera, GPS and a microSD memory card slot — all packed in a solid aluminum case. Interested folks will be able to grab the Legend for 26,500 INR, which is about $592.

The other phone is the Huawei U7510, which is known in the U.S. as the T-Mobile Tap. Specs wise it boasts a QVGA display, 2-megapixel camera, Bluetooth, FM radio, media player, 100 MB of internal memory that is further expandable with microSD cards. India’s BSNL is offering the device for 6,500 INR ($145) and that money also buys you 25MB of free data usage for the first two months…

A new contender in the watch phone market is the Canadian company Neutrano. Actually, their first prototypes were first seen...