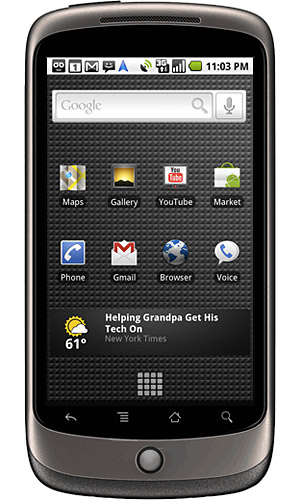 The Google Nexus One might be one helluva smartphone, but that hasn’t stopped a vocal minority from making noise over the N1’s problems – especially the spotty 3G network reception that some N1 users are seeing on T-Mobile. We previously mentioned the issues that T-Mobile Nexus One users have been experiencing, to which T-Mobile and Google announced that they’d investigate the matter. Well, it seems that Google has finally called off their investigation and will no longer be pursuing software fixes for the problem. Despite months of investigating the problem, users continue to have reception problems on T-Mobile’s 3G network.

Hey guys,
I’ve seen some recent speculation on this thread about an OTA to improve 3G connectivity and I want to give you an update on the situation.
While we are continuing to monitor user feedback regarding the 3G performance on the Nexus One, we are no longer investigating further engineering improvements at this time.
If you are still experiencing 3G issues, we recommend that you try changing your location or even the orientation of your phone, as this may help in areas with weaker coverage.
-Ry Guy

The announcement essentially means that Google is no longer looking into possible software fixes that would improve 3G reception. It’s not clear if the problems are related to software problems with the N1’s baseband or if the issues are related to T-Mobile’s 1700Mhz AWS 3G network.

Some T-Mobile Nexus One users are up in arms over Google’s apparently decision to abandon them in their time of need. As forum member lzb302 puts it, “Looks like [Google] are writing us off!”

If you’ve been contemplating buying a T-Mobile Nexus One, we’d like to know if this announcement from Google will affect your decision in any way – especially with the Verizon Droid Incredible just days away from an official launch.

Dell's first smartphone didn't exactly knock our socks off but Engadget got a hold of its upcoming Windows Phone 7...