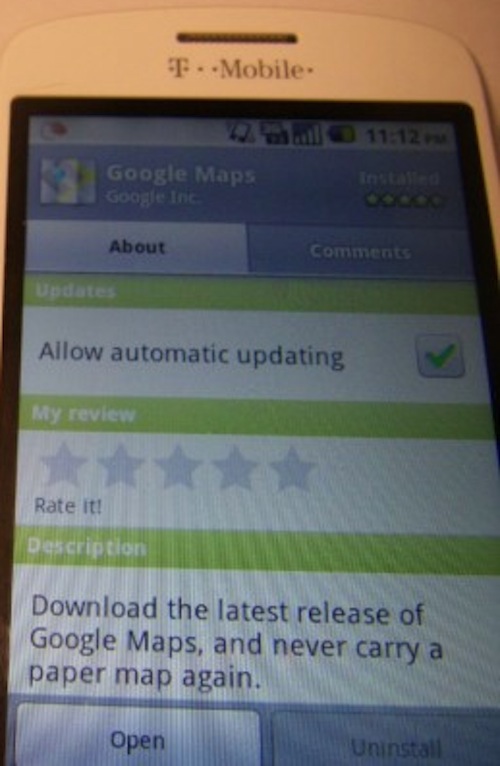 Sometimes, it’s the little things – the details – that really make all the difference. It’s not the size of the feature, it’s how you use it. Don’t judge a smartphone feature by its cover. Ok, enough with the mangled rhetoric. What we’re getting at here is that sometimes the smallest little smartphone features can make a huge difference in the way you use it. Case in point, Android OS 2.2’s automatic app updating feature. An alleged “trusted tester” has leaked a screenshot of the upcoming Android 2.2 OS, codenamed “Froyo,” which shows off an updated Android Market app that includes the option to “allow automatic updating” of apps in the background!

It may be little more than a simple checkbox  in Froyo’s Android Market app, but it’s a really big deal. Since Google’s mobile operating system can run tasks in the background, it should have no trouble automatically downloading updates for apps that you always want running on the latest version. It makes sense to leverage that functionality to make users’ lives a little easier. If you’ve ever glanced at your Android phone and noticed a dozen or so apps that all have pending updates, you know how tediously frustrating it can be to click through each app and manually update them one-by-one. This rumored automatic app updating feature would completely solve that problem.

The auto-update feature could also address the fragmentation issue. We already know that Froyo will tackle fragmentation by de-coupling (unbundled) some core apps – like Google Maps – from the Android OS and making them separately downloadable apps in the Android Market. With auto-updates, developers would be able to push updates to users at will, allowing them to help ensure a consistent user experience across the board.

True or not, we can’t wait to get our hands on Froyo. With a little luck, we’ll see Android 2.2 at Google I/O next month!

Is Apple going to buy ARM?

Fresh off an amazing quarter, Apple acquisition rumors are flying fast and furiously. The iPhone maker is supposed to have...