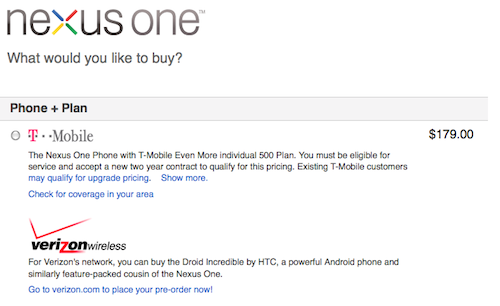 If you’ve been waiting patiently for Verizon Wireless to go live with the much-anticipated Google Nexus One and bring its sexy, Android-powered aluminum unibody to the No. 1 wireless carrier (by subscriber count), you might be a little disappointed with this news. It looks like Google is no longer backing the Verizon Nexus One on its google.com/phone webpage. We’ve been keeping an eye on the site for any hints of when Verizon would launch the CDMA Nexus One, and we’re sorry to say that it Google seems to be passing on Verizon. Instead of offering a a Verizon N1 launch date, Google is now pushing the Verizon Droid Incredible to potential customers.

The “coming soon” notice on the Nexus One page has been replaced by a little blurb about how anyone waiting on the Verizon N1 “can buy the Droid Incredible by HTC.” Google goes on to mention that the Incredible is a “similarly feature-packed cousin of the Nexus One.”

The move makes sense. Why would Verizon offer two phones that are as similar as the Incredible and the Nexus One? As we noted in our own Verizon Droid Incredible review, the Google Nexus One and the HTC Incredible are strikingly similar. They share the same ancestral DNA, and sport much the same hardware specs – 1Ghz Snapdragon processor, 512MB RAM, 3G data, WiFi, GPS, microSD card slot. The only glaring differences between the two handsets are the use of the Sense UI on the Incredible versus the Nexus One’s stock Android homescreen, and the Incredible’s 8-megapixel camera versus the N1’s 5-megapixel shooter.

The Verizon Droid Incredible launches on April 29 for $199.99 with new 2-year contract.

Will you be picking up an Incredible from Verizon, now that the N1 is no longer an option?

RIM: There is no more Tour. ‘Bold’ is our new high-end flagship