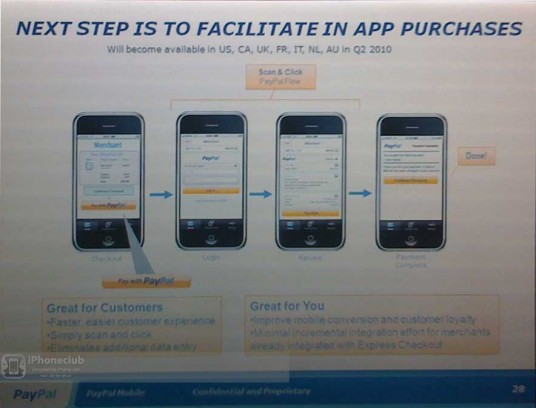 PayPal has been working their iPhone app a lot lately, most recently including the ability to Bump to send money to others. Next up is a little something called PayPal Library, which will apparently act a lot like Square, and will have the added benefit of enabling in-app purchases. What that means is that you’ll be able scan a card (via camera? Peripheral?) and and tap a key to transfer money from one PayPal account to the other, at first for real-world goods and services, and later on for mobile software. There’s an API available that will allow developers to include in-app purchases without leaving the app, which sounds pretty convenient. This has apparently been in closed beta for two months or so, if you want to get into it.

There’s also some rumbling that PayPal will become an option in the Android Market to buy apps – that’s right, an alternative to Google Checkout. There’s less to back up that rumour, so don’t hold your breath, but we can dream, right?

One of the biggest pains is always being forced to plug your iPhone, iPod Touch or iPad into a computer...