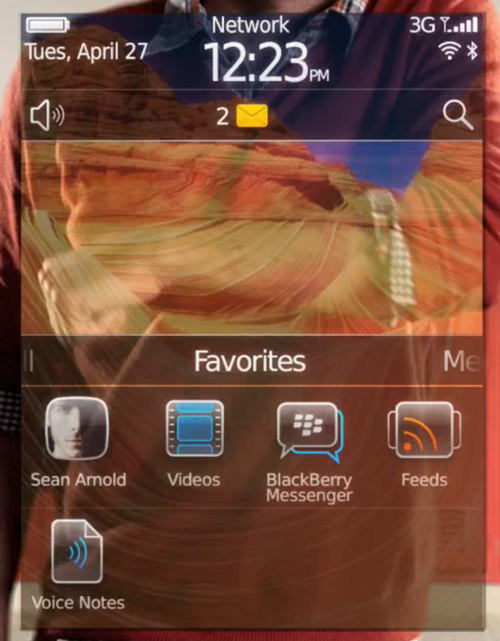 1:30 – On to Mr. Hipster Dufuston and his brah Sean Arnold. The first thing he does is swap the home screen with a sideways swipe. It’s a slightly different take on how Android and iPhone do multiple home screens, but achieves the same level of functionality. One of the things that pops out under Favourites here is Feeds – it looks like RIM’s Viigo acquisition is going to good use in a preloaded RSS reader already! We’ll see more of that app later. Contact shortcuts (called Favourites) use icons made from address book profile pictures, which is a nice touch. 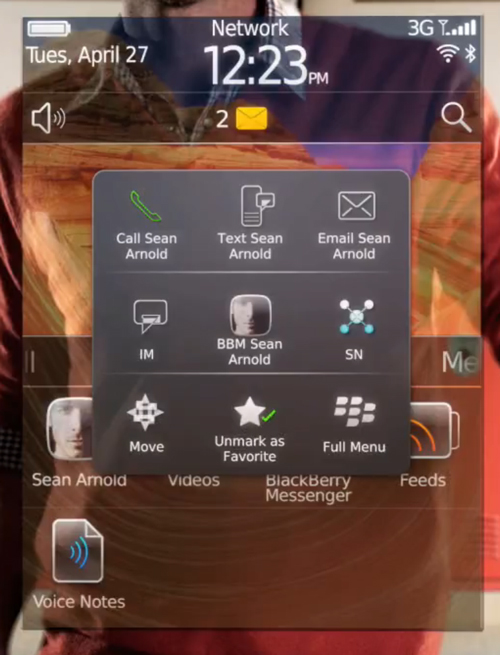 This is where things get kind of interesting. There’s one icon in the short menu that he brings up next, SN, that catches my eye. Perhaps it stands for Social Network, given the icon? Maybe this could give you access to someone’s extended network, enabling you to get in touch with the friend of a friend on the off chance you don’t have any contact information available. It could just launch into Twitter and Facebook feeds from that contact, but that seems to be what Feeds does – why not just use the Feed icon? It’s hard to say right now, but I’m certainly curious… 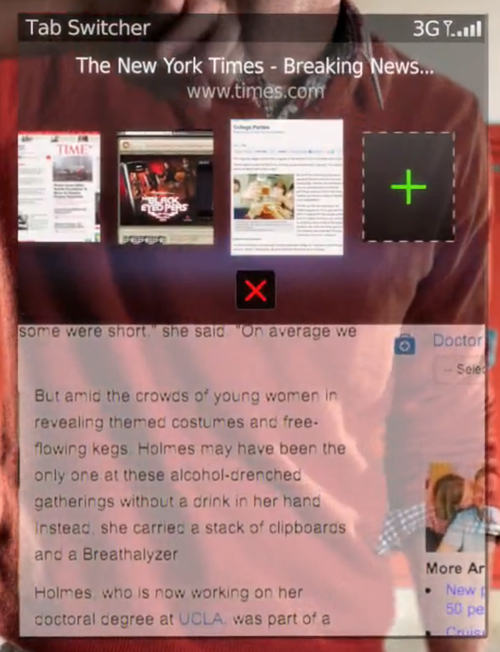 1:46 – RIM continues to pimp out BlackBerry Messenger as a means to find where people are, but I’d really like to see some tight GPS integration there at some point – a Latitude knock-off for BBM would be sweet. A link launches into the new Webkit browser, featuring tabs and a bunch of performance improvements. It looks like the Tab Switcher is summoned with an upward swipe, which works for me. We’ve already seen a bunch of that, though. 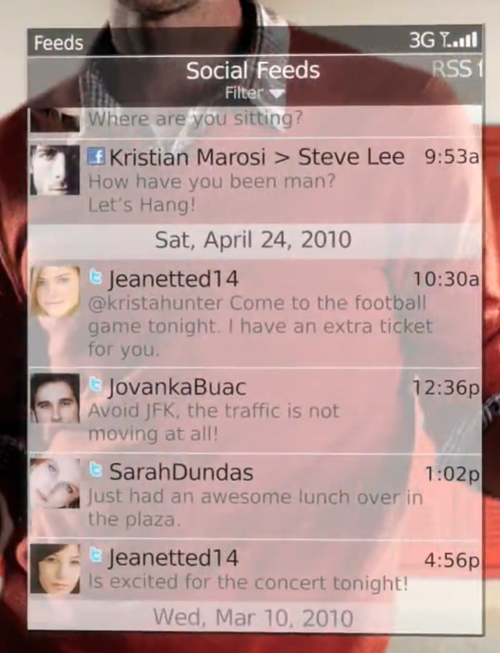 1:50 – So, buddy finally opens up Feeds here, and it turns out they include Social Feeds, like Twitter and Facebook. They’re laid out just like messages (in chronological order), and include the ability to filter based on network or contact. Tapping a contact gives you quick access to AIM, Twitter, Windows Live Messenger, Google Talk, BlackBerry Messenger, Yahoo! Messenger, Facebook and MySpace info if it’s available. Having everything conglomerated here is great. Currently, most of these apps have some sort of tie in with the native Messages app, but amount to little more than notifications and shortcuts that launch into the separate designated applications. By contrast, it looks like all the functions BlackBerry 6 will be fully integrated in one place. You can swipe to one side or the other to just view individual social networks, very similar to Sony Ericsson’s Timescape. Only, y’know, not crap. 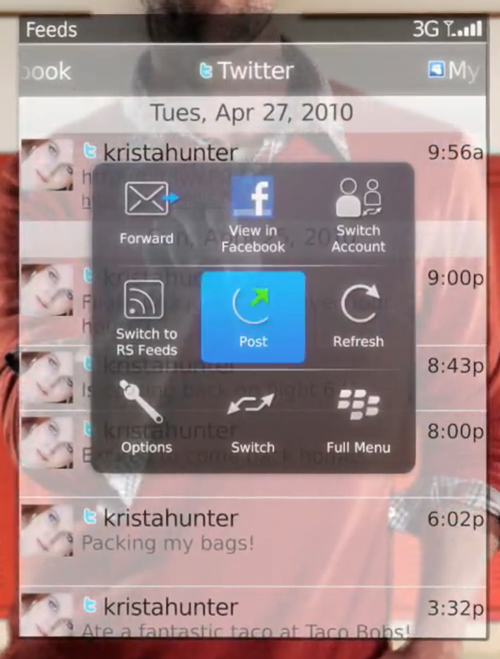 1:57 – Still within the Feeds app, a short menu comes up providing a few new options, including the ability to switch to regular feeds (forgot an ‘S’ in “RSS” there, RIM),  post an update, and switch to another account. Yup, multiple twitter account support, which the current official Twitter app is currently lacking. 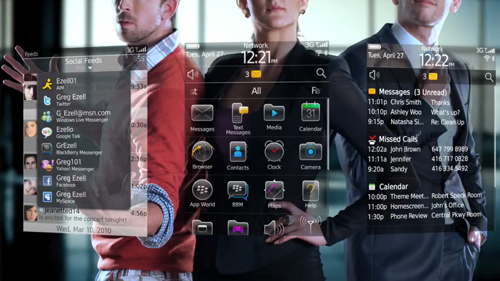 And that is about it! RIM managed to cram a whole hell of a lot of information into 2 minutes and 18 seconds. We’re expecting BlackBerry 6 to be available sometime in Q3, along with the BlackBerry 9670 clamshell. Personally, I dig the changes, and though they might not have all of the flash that Android and iPhone have set the bar for, RIM has really managed to strike a nice balance between holding onto what makes their products popular, as well as keeping things fresh.

What do you guys think?