Okay, so you’ve watched that promo video for BlackBerry 6 announced at WES 2010, and think you got the general gist of what’s new? Well, there’s a lot in there you might have missed. Here I’ve gone through every teeny-tiny detail and picked out what’s new and important about the new BlackBerry OS. There’s only so much we can know about without a device to try out for ourselves, but we can learn a whole hell of a lot from this video. By and large, folks who have used BlackBerry in the past will get along fine, and the aesthetic changes should lower the learning curve for those new to the platform. There are, however, a few new features, some borrowed from other manufacturers, if slightly reworked. Hey, even the ad itself reminds me of Palm.

Anyway I’ve found more than a couple of surprises after combing through the clip, and I think you will too. 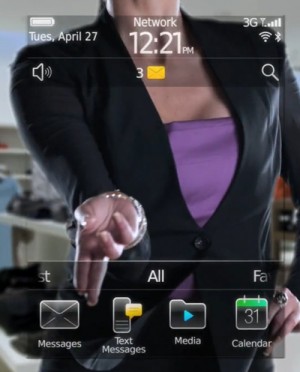 0:13 – Kicking things off, we have Ms. Hayhayhay McGirlfren’. Flick up to bring up the icon screen. Yep, taken out of the Android playbook, but the tabs along the top allow you to filter which apps show when you bring things up. More on that near the end of the video. 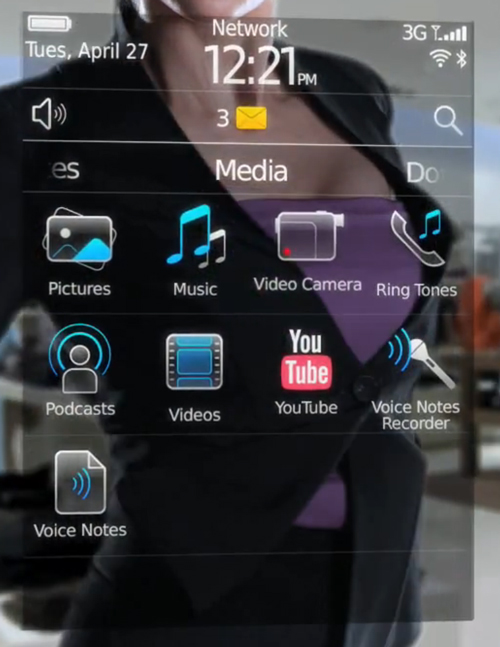 0:16 – The tabs continue even as you drill down into subfolders, as shown here in the Media folder. I’m still not sure if that’s still a sorting mechanism, or if it lets you navigate horizontally to other folders at the same level. Also worth noting is a preloaded YouTube app (which is awesome, since the browser streaming sucks and works about 10% of the time for me), and a brand new Podcasts application. 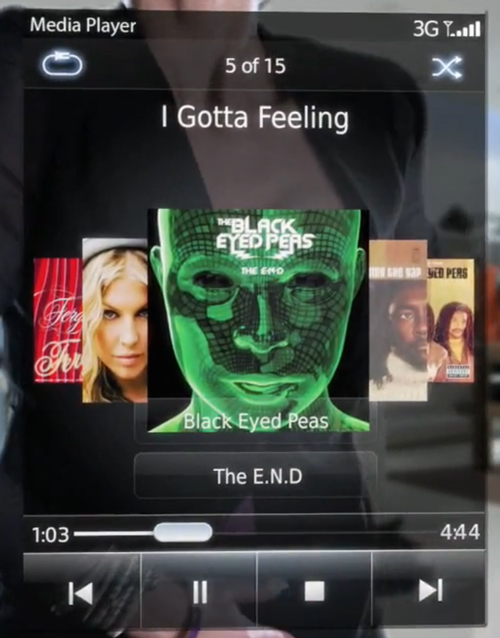 0:27 – Most of the media app is pretty much the same, with the addition of larger icons next to entries. The search bar is still at the top, you still have to plow through music categories like artist, or album. The actual media player has had a bit of a facelift, and includes album art of not just what you’re currently listening to, but a carrousel of other related music, in this case Will.i.am (of course). Left and right gestures let you pick out new tunes. I hear this is like CoverFlo, but wouldn’t know – couldn’t get me to touch iTunes or an iPhone with a cattleprod. 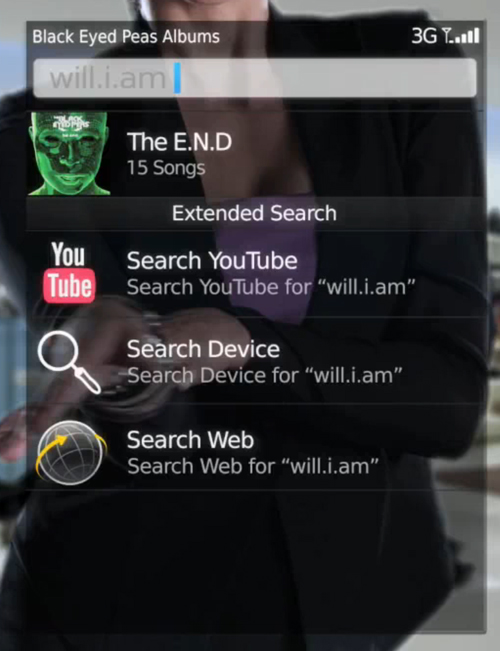 0:36 – This bit is brand new. Extended Search allows you to quickly access related content on YouTube, on the web and on your device from within the media app. Android already does this kind of stuff, so it’s nice to see on BlackBerry too. 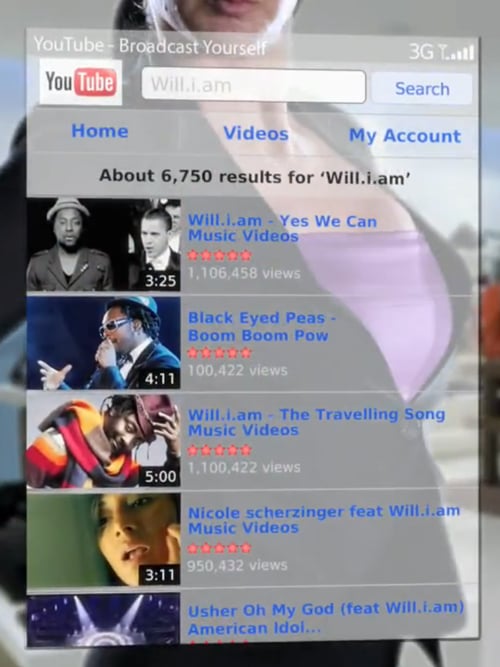 Following that, we’re getting a look at the YouTube application, which is what you’d expect: a tailored app emulating the mobile website. It includes access to your account and search, as well as the ability to rate, favourite, e-mail, and add YouTube videos to playlists. 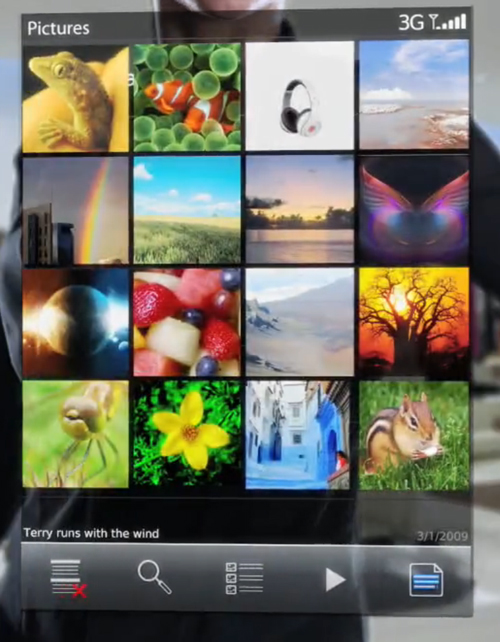 0:49 – Now we get a look at the pictures app. The top level’s shortcut bar shows search and folder creation, and after navigating to a subfolder, you’ve got options for list view, search, slideshow, and a few unfamiliar icons – possibly for captions and deleting. Greg also noticed the first gen iPhone background – second icon from the top! Inside joke? Jab? Homage? 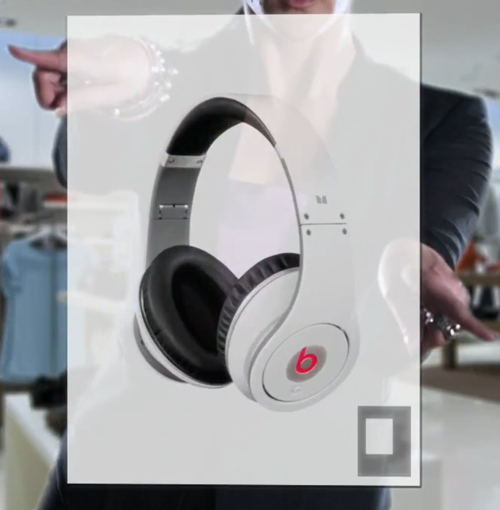 Of course, the star of this segment is multitouch zooming. Everybody “oo” and “aah”. 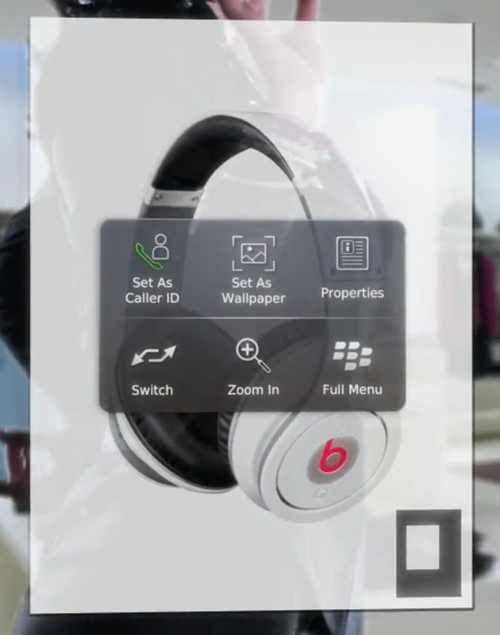 0:55 – What pops up next is what looks like the next generation contextual menu. On current BlackBerrys, you can bring up a “short menu”, that lists all of the common tasks that can be done whereever you happen to be by simply clicking down on the trackpad or trackball. If you want more options, you hit the menu key. That system seems to have changed a bit in OS 6.0, by offering large icons for common tasks, with the option of opening up a fuller menu. From previous hands-on experience, we’re led to believe this new menu is launched via long press.