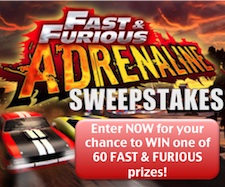 I-play has announced the global launch of Fast & Furious: Adrenaline for iPhone and iPod touch. The game is based off the popular (at least I think it’s popular) series of films starring actors like Vin Diesel and Paul Walker. Ahem.

Racing and Fast & Furious fans everywhere will, for the first time, be able to share their dominance in the world of underground street racing through innovative social network and connectivity features. Fast & Furious: Adrenaline allows players to upload videos of their fastest races to both Facebook and YouTube and see how they stand up against the competition on the Facebook leader board. The game also features Wi-Fi and Bluetooth multiplayer functionality that allows players to connect for multiplayer turf wars and ghost races against other players. Regardless of game mode, this innovative new title delivers high-resolution graphics, ultra-responsive accelerometer-based steering controls and smooth gameplay that delivers the pulse-quickening speed and intensity of real street racing.

F&F:A is available in the Apple App Store for $2.99 – hit up iTunes to get your racing action on! You can also enter an F&F-related competition on Facebook here.

BlackBerry-maker Research In Motion (RIM) announced a few fairly impressive BlackBerry smartphones and showed off a preview of their upcoming...