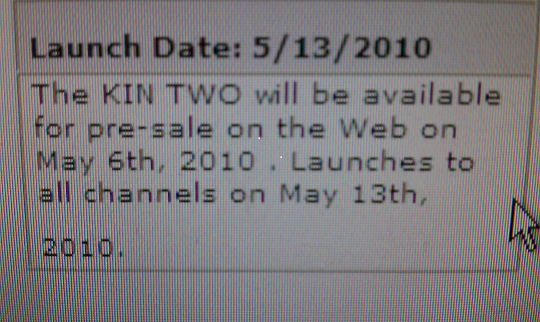 Microsoft’s Kin One and Kin Two will be launching on May 13, with preorders beginning May 6, according to some screenshots from within Verizon. Although Verizon and Vodafone are the only publicly acknowledged carriers, there’s a list of other potential service providers who could be picking up Microsoft’s  social networking brainchild.

The inventive user interface for accessing info from social networks like Twitter and Facebook on the Kin phones is definitely neat, but the closed development environment could turn off a lot of power users. The Kin One is the smaller device,  packing a QVGA display, 4 GB of internal memory, 5 megapixel camera, Zune integration, and FM radio in a slider form factor with squarish proportions. The Kin Two, by comparison, rocks a landscape slide-out keyboard, 8 megapixel camera, HVGA display, and 8 GB of internal memory.

Those who want a step up from a dumbphone, but don’t want to take the plunge into full smartphone geekery should mark May 6 on their calendars.

Verizon Drops Price on the Pre Plus to $29.99 on 2-Year Contract

It sure seems that with each passing week, we see new price drops on the Pre and Pixi. This week...