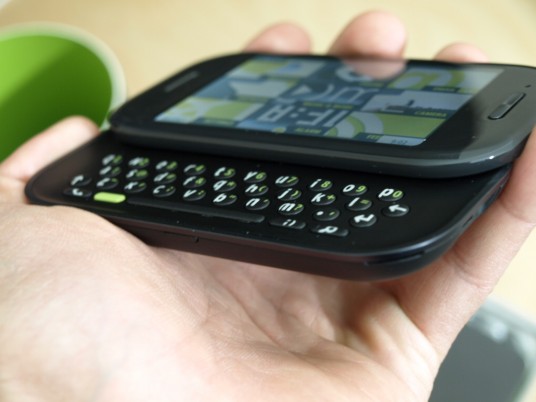 Microsoft’s KIN lineup of consumer oriented not-so-smartphones has just gone official. Since Microsoft unveiled the KIN phones last month, the company has been mostly quiet about their consumer-friendly, social network-savvy slider phones. But, that didn’t stop us from getting our hands on our very own Kin Two! While Marin drops some knowledge about the more compact Kin One, I’ll be taking you on a brief hardware tour of the Kin Two. Known previously by it’s Project Pink “Pure” codename, the Kin Two is the larger, more capable sibling to the Microsoft Kin One, and it’s almost good enough of a feature phone to be consider a smartphone competitor – almost.

The Kin2’s spec-sheet reads like a lot of other smartphones on the market today – it’s got an impressive camera, large touchscreen, slide-out QWERTY keyboard, browses the web, plays music and video (through the Zune media player) connects with social networks, and does email without breaking a sweat. The only thing is, the Kin One runs a proprietary operating system that’s akin to a dumbed-down Windows Phone 7.

As far as specs are concerned, the Kin Two features a 3.4-inch capacitive touchscreen, 8-megapixel camera (with LED flash), 3G data, WiFi, GPS, Bluetooth 2.1, 720p HD video recording, 3.5mm headphone jack, and of course, the side-sliding QWERTY keyboard. The touchscreen is generously proportioned, and should make the Kin experience as enjoyable as any other featurephone. The 8-megapixel camera works well under most conditions, but struggles under lighting conditions that are slightly dim, but not so dim that the LED flash kicks in. But, boy, when that flash kicks in, watch out – it’s bright! The keyboard reminds us of the Sidekick, as well it should – the Danger team that designed those HipTops of yore are responsible for the industrial design of the Kin lineup.

The Kin UI uses a lot of swipe and flick gestures for navigation. The “Loop” homescreen aggregates social network updates and message from your friends in one convenient place. There’s a “Spot” feature that makes sharing content (webpages, messages, emails, pictures, videos, etc.) with your friends as easy as dragging and dropping almost anything onto the little green circle located along the bottom center of the screen. UI animations (screen rotations, side-sliding panes) are fairly smooth, but tend to lag under certain situations. We’d compare it with UI transitions on iPhone and Android, but those are full-blown smartphone operating systems and that wouldn’t be fair to the Kin Two.

Setting up the Kin is simple – it should take no longer than a few minutes. All you need to do is boot up the device, enter your Windows Live ID (or create one on the spot), enter social network login information (Facebook, Twitter, MySpace), and you’re off and running. Kin will automatically update your phone with contacts (including profile pics), status updates, and messages. It’ll even pull down photo albums that your friends have posted to Facebook!

Photos are automatically geo-tagged with location data using GPS or cell-tower triangulation (when GPS isn’t a viable option – think tall downtown skyscrapers). Photos taken with the Kin Two’s camera are automatically uploaded to the Kin Studio service for safe-keeping. And, when storage space on the Kin Two’s 8GB of memory runs low, it’ll reduce the resolution of the pics on the phone and use the files stored in the cloud for full-res images.

There are some problems, though. We haven’t had enough time to fully test the Kin Two, but in our short time with the handset, we can tell you that the camera shutter button is awkwardly placed. The shutter release button sits on a downward-sloping edge, making it difficult to press without dropping the phone or causing it to wobble in the hand. You also won’t be able to add any apps outside the email, browser, camera, messaging, contacts, and Zune music player apps.

Check out our coverage of the Kin One unveiling for more photos and video!

Microsoft Kin One (Kin1) unboxing and hands-on video and pics

We have Microsoft's Kin devices in the house! I've been fondling the oddly-shaped Kin One (or the Kin1, if you...