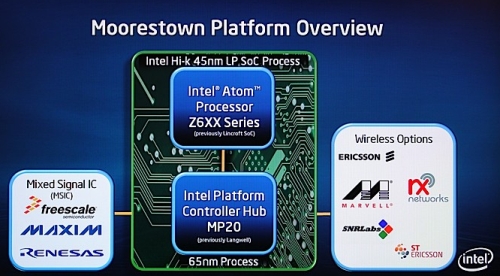 Intel has just announced the “Z6xx Series” family of Atom chips. It’s a 45 nm system on chip that combines a vanilla x86 core, accelerated graphics, video decoding and encoding, as well as memory and display controllers. You combine it with another chip called the MP20, and a dedicated Mixed Signal IC, and you can realistically shove the entire package into a smartphone. You’ll get around 10 days of standby, 2 days of non stop audio playback, and 4 to 5 hours of web browsing, all assuming your device has a 1500 mAh battery.

Now I’m not a mobile phone manufacture, but why wouldn’t I simply call Qualcomm and ask them for their Snapdragon chip which has everything the Intel platform has, plus GSM/EDGE/HSPA radios, GPS, WiFi, and more importantly better battery life, slap that into a plastic shell, throw Android on it, and then start selling smartphones?

This isn’t to say Intel is doing a bad job. They’re progressing by leaps and bounds in terms of power consumption, but they’re still not caught up with what ARM produces, not to mention there are no mainstream mobile operating systems that are built for x86 yet. Will there ever be a time when Intel can realistically make chips that go into mainstream mobile phones? Absolutely. At the rate they’re going, I’d be confident in saying it’ll take less than 5 years, or 2 mobile phone generations.

What will ARM have out by then is a totally different story, but hey, that’s what makes keeping track of this industry so fun!

Oh and for the tech heads, the Z6xx meant for smartphones scales to 1.5 GHz, but Intel didn’t say what frequency they used when publishing the battery benchmarks I listed above. Also note that 1 MHz on an Intel Atom chip is not equal to 1 MHz on an ARM 11 chip, which itself is not equal to 1 MHz out of an ARM Cortex A8 chip. Megahertz figures tell only half the story when it comes to smartphones. I’d gladly take a 600 MHz Cortex A8 based device any day over an 800 MHz ARM 11 powered, filled to the brim with marketing propaganda, Samsung Jet.

Well, this phone has gone from a couple of pictures, an ugly design, and rumors of where it will be...