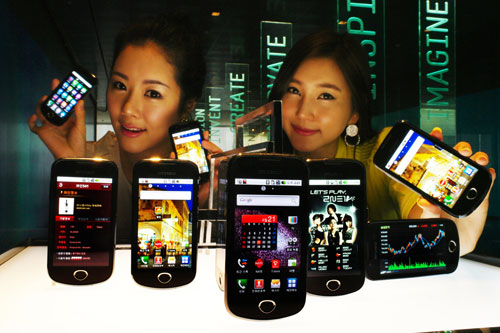 The Samsung M100S has been launched in South Korea as the Galaxy A. SK Telecom is Samsung’s “partner in crime,” hence in addition to the Android Market – the device will also work with the carrier’s “T Store.”

As we’re talking about Samsung’s domestic market, T-DMB mobile TV is a must-have feature and the Galaxy A delivers on that front. Rest of the specs include a 5-megapixel camera, 720MHz CPU (not a Snapdragon?) front-facing camera for video calls, 8GB of internal memory, HSPA and WiFi connectivity, 3.5mm headset jack, Bluetooth 2.1 (why not 3.0 like in the Galaxy S?) and a 1500mAh battery. In addition, this baby rocks a 3.7-inch WVGA AMOLED PLUS touchscreen, which I guess is the other name for SUPER AMOLED, though I may be wrong. Samsung says this screen offers more touch sensitivity and improved visibility and clarity when compared to conventional AMOLED.

No word on pricing, though I’m sure we’re not talking about a cheap handset…