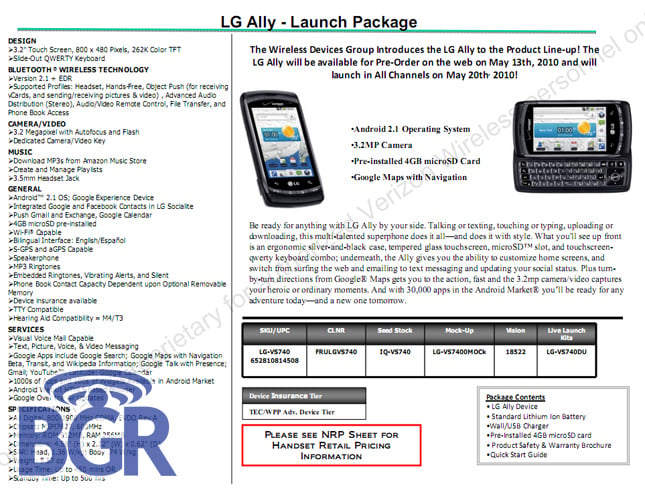 Those hankering for the new Android-powered LG Ally  on May 20 will be able to get their Verizon preorders started in two days. There are a lot of good things going for the Ally, and the leaked slides go over the device in detail. We already know about the specs: Android 2.1 (complete with Google Maps Navigation), a 3.2 megapixel camera with flash, a 3.2″ WVGA (800 x 480) touchscreen, slide-out QWERTY keyboard and Wi-Fi 802.11 n. The LG Ally apparently will not be shipping with the previously-speculated 1 Ghz Snapdragon processor, but rather the 600 Mhz (same as the Palm Pixi and Motorola Devour), alongside 256 MB of memory. The LG Ally will also be employing something called S-GPS, which is a way of simultaneously transmitting voice and location data to the carrier when making a call.

As for the software, it looks like there are some modest customizations to include a bottom dock for consistent shortcuts across multiple home screens (à la iPhone), though it is by and large a “Google Experience”, hopefully without any of that S-Class nonsense. The hardware is looking significantly more different than from its early Aloha days, which is for the best; the new design is much more sleek, curvy, and stylish. Overall, the Ally is certainly a step up from LG’s other Android slide, the Eve, and will butt heads with other midrange smartphones, like Motorola’s Devour.

There’s a big launch event happening today in NYC, and we’ve got two of our guys going to get some hands-on footage for y’all, so sit tight.

The Hockey News App for Android Now Available in Canada

A little late to the party for sure, but late is better than not showing up at all. With the...