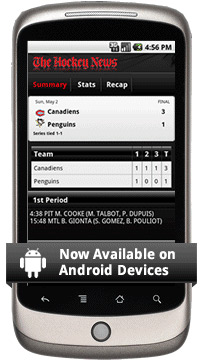 A little late to the party for sure, but late is better than not showing up at all. With the Stanley Cup Playoffs getting down to the nitty-gritty, Android users will be pleased to know that The Hockey News App for Android is now available. The Android app joins the previously released iPhone and BlackBerry apps… and is, of course, a free one to download and install on your Android-powered handset of choice (on Android OS 1.5+).

The Hockey News for Android provides everything you need to know about my favorite frozen game. Get live scoring, player stats, standings, featured content, team-by-team coverage and a heck of a lot more. It’s basically a ‘must have’ for any hockey fan.

To get started, search the Android Market for ‘The Hockey News’, or head on over to thn.mobi for all the details.

Important Note: As the title reads, this one is available in Canada only.

He shoots, he scores!

The sexy follow-up device to the HTC Hero, the HTC Legend, is apparently making its way to Bell for those...