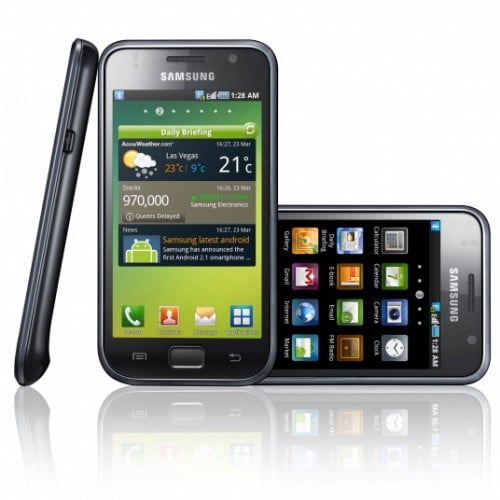 The Samsung Galaxy S stole the show at CTIA – for about an hour. Still the device is downright sexy, and sports a feature set similar than that of the EVO, just not as high end. There’s now a video out and about suggesting that the Galaxy S may hit T-Mobile USA before anyone else. I sure hope it does.

The Galaxy S comes with a 4 – inch Super AMOLED display, ensuring a beautiful, crisp display whether it’s in direct sunlight or not. The best-in-class Super AMOLED display is definitely the biggest appeal to the device, If the Galaxy S didn’t have this type of screen available, it would be easier to just pick the EVO, but it’s not. If you were to compare the EVO to the Galaxy S, you’d find that the latter has a smaller screen, and lower mega pixel camera with no flash. I for one don’t need a 4.3 inch screen on a device, or an 8 mega pixel camera. While they would be nice, they aren’t deal breakers. I just wish the Galaxy S had a flash for its camera though. But remember, the Galaxy S has a better GPU than anything else we’ve seen on a mobile device.

The video below takes a walk through of the device, and along the way, you’ll see some familiar apps on the device. There’s a My Account, Visual Voicemail, as well as a TMO Contact application. So, the Galaxy S is headed to T-Mobile, obviously. Even the model number of the device, SGH-T959, is similar to that of other Samsung model numbers used by big Magenta.

There’s enough from the video to practically confirm that the device is heading to T-Mobile. That leaves one last question. When will we see this handset going live on T-Mobile? This certainly seems to be rounding out the secret project, Project Emerald we heard about not long ago.

We’ve seen the Galaxy S hit the FCC with AT&T bands before, and rumors of T-Mobile getting a Samsung Galaxy S-like device have been floating around as well. There have also been rumors that the Galaxy S will actually become available on all four major US carriers at some point. Hopefully all these rumors are true, and users on all carriers can experience the Super AMOLED action in the near future. But, if the S actually gets picked up by all carriers, then T-Mobile won’t be able to to cash in on the Galaxy S as one of their exclusive handsets. That would be a shame for T-Mo.