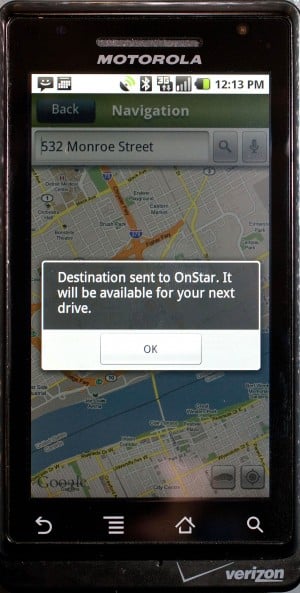 At CES, we saw GM’s Android application for their electric car, the Chevvy Volt; today, it’s been updated to include Google Maps navigation, a feature first released in Android 2.0.  From the new Navigation tab, you can either launch into the standard voice-guided directions included in Google Maps, or send the directions to OnStar and be directed by them.

The app does a lot of other cool stuff already, like monitor and schedule charging, pop the trunk, start the car, sound the alarm, and accessing mileage stats. Earlier this week, there was talk about Volt switching its actual on-dash operating system to Android, but that rumour might have just been a misinterpretation of this announcement. That’s too bad, because Ford is competing with a great developer-friendly system called Sync, and a switch to Android could have competed nicely.

The Navigation tab won’t be ready for Volt’s launch, but will be in OnStar’s Android app after a future update. Our boys will be going to Google I/O, where the new app will be demoed later this week – be sure to stick around to check it out.

Google may bring video chat to Android with GIPS purchase

One reason I'm a fan of Android is that I know Google will continue to pump resources into it. The...