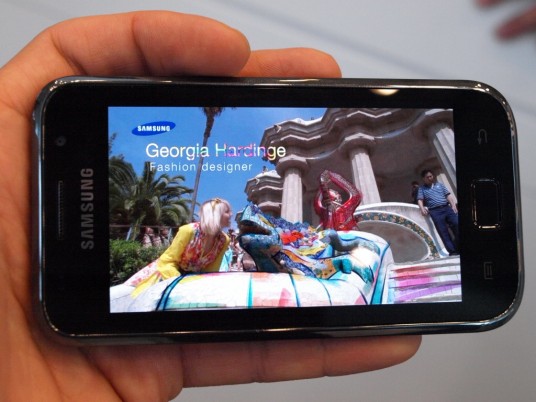 We’re at Google I/O 2010 and we’re happy to say that there are actually some Android handsets here for our enjoyment. Aside from today’s Google Wave and Chrome Web Store announcements, one of the stand-out booths at the conference was Samsung. The Korean mobile phone maker had their new Samsung Galaxy S Android phone on hand to showcase what the company can do with the Android platform. The phone runs on Android 2.1 OS, so you know it’s all up to date on features. It’s packed to the gills with hardware like the 1Ghz CPU and the class-leading graphics processor that should make for stunning 3D games. But, the one thing that always catches our eye is the Super AMOLED capacitive touchscreen used on the Galaxy S. We get some hands-on time with the handset to demo the display, as well as the Daily Briefing feature.

For those of you still unfamiliar with the phone that will single-handedly redefine what OLED displays should look like on a smartphone, the Galaxy S is Samsung’s Android flagship. It sports a generous 4-inch Super AMOLED display that has better color range, saturation, is thinner than any other panel, and reflects much less light than any other OLED display. That means you get eye-popping picture that doesn’t wash out in direct sunlight. The handset also features the 1Ghz processor, 5-megapixel camera capable of recording 720p HD video, 3G data, WiFi, GPS, microSD card slot and a 3.5mm headphone jack.

Notice in the video the viewing angle afforded by the display. We did our best to capture the display’s brilliant color reproduction in HD video. The Super AMOLED technology truly is amazing. You can tell from the color gradient bars that the Galaxy S display has superior contrast to the HTC Incredible display (the further right you can resolve the vertical lines within the colored bars, the better the contrast). Gamma was also better than the Incredible and the Motorola Droid.

The Daily Briefing feature is also handy – it puts all the most important information in your life into a convenient little widget on the homescreen. Take a look at the video and check it out for yourself!

Larry Page says that your poor battery life on your Android device is because of the apps it's running, not...