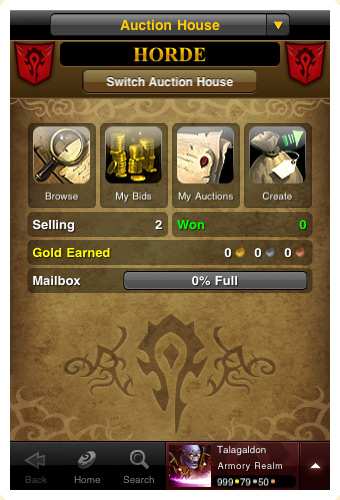 Yeah, you can try to hide that World of Warcraft Armory app on your iPhone by switching homescreens, but we all know you’ve got a level 80 gnome warrior. Blizzard has just announced a new iPhone and web app for their wildly popular online role-playing game called Remote Auction House, which will allow you to monitor the sale of virtual goods, even if you’re somewhere without access to the game. World of Warcraft Remote Auction House lets you browse what’s for sale, get notices of your stuff sells, receive push notifications when you’re out-bid, and place items up for auction.

The kicker is that some of the functions, like collecting gold, bidding on and creating auctions, are locked to premium subscribers. What’s another $2.99 on top of the $15 or so you’re already shelling out for your WoW account anyway? The free app still offers a lot, and would definitely be handy for casually browsing the auction house when you’re dead and waiting for your raid to wipe. For the beta, you’ll only be able to make 25 transactions per day using the app, but once it’s launched, the heavy-duty auctioneers with the extra subscription will be able to make 200.

Interested in giving it a shot? iTunes link below, and more info at the World of Warcraft Armory.

If you were watching our live-blog coverage of the Google I/O keynote, you know that the search giant introduced a...