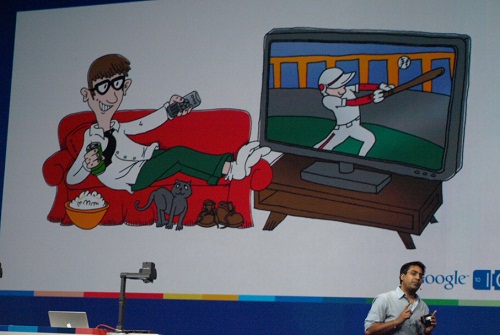 Google’s not content to be on your smartphone and computer, as the company is bringing Android 2.1 to your television via Google TV.

Google TV, which will come integrated in TVs, as a set-top box, and as software, is essentially trying to make your TV smart by unleashing the full power of the Internet. This means you’ll be able to watch your normal television programming but you’ll also be able to do searches for content on the web. You’ll be able to search for content on the web and it can integrate with your DVR to schedule recordings. Think of it as a more intelligent TiVo with stronger web integration.

We’re talking about the full web here, too, as it will come with a Chrome browser that has full support for a Flash 10.1 plug-in. Google has also introduced YouTube Leanback, which makes the popular video site more appropriate for the living room environment by simplifying the interface. There will also be support for online video services from Amazon, Netflix and others.

A redone cable box user interface is fine and dandy but what really makes Google TV interesting is that it’s based on Android 2.1 and it will be bringing apps to your TV. Any Android Market app that doesn’t require phone functionality will be immediately usable on your TV. This means you can use something like Pandora on your TV without any hassles.

The search company will also be releasing a specific software development kit later this year that will help devs create programs optimized for a bigger screen. I can’t wait to see what content creators do with this, as the idea of standard mobile apps on my TV isn’t very appealing.

Google will also make the software open source next year as part of the Chrome OS and Android branches, so other set-top box makers could integrate this service in its hardware, as well as layer in features on top. Google TV itself is expected to be updated to Froyo in the future and I’m sure it will continue to evolve.

Google TV will launch in the Fall and it will be integrated with Sony televisions and Blu-ray palyers. Dish Network and Logitech will be bringing out set-top boxes around that time frame, Harmony will create remotes and you’ll be able to pick up the hardware from Best Buy.

Android 2.2 is wonderful and all, but Google gave us a sneak peak at some future capabilities of its mobile...