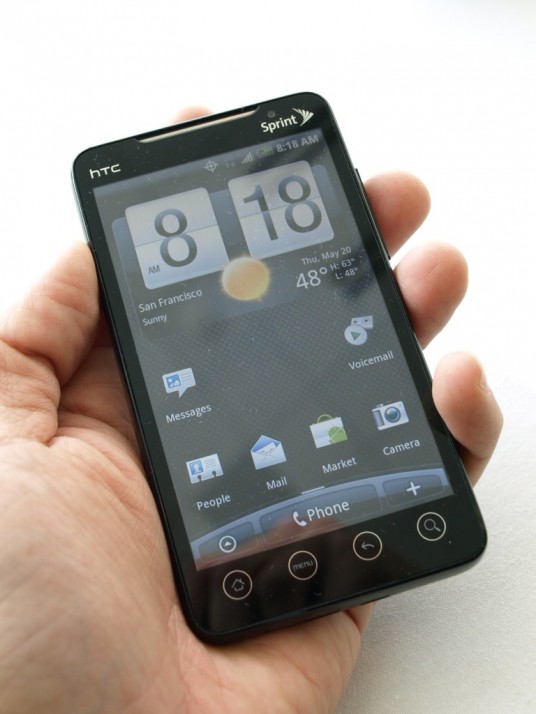 We just took possession of our very own Sprint HTC EVO 4G Android smartphone, and we couldn’t wait to get this hot handset out of the box and how you what it looks like in its retail packaging. As we saw previously, the HTC EVO 4G is packaged in a post-consumer cardboard box that reminds us of an egg crate. But, instead of eggs, we find inside the 4.3-inch screen on the baddest Android phone of the year. With Android 2.1 OS running the show and multimedia chops coming out the wazoo HDMI port, the EVO 4G is clearly a leader in the Android space at the moment, especially considering that the EVO is America’s very first 4G WiMAX phone.

The handset sports a 4.3-inch capacitive touchscreen at WVGA resolution, 8-megapixel camera (with dual-LED flash), a front-facing video-call camera, 3G data, 4G data (!), WiFi, GPS, Bluetooth, microSD card, HDMI port, movie-watching kickstand, and 2-way video chat. When in a WiMAX market, the EVO 4G will actually be capable of ferrying voice and data over the network at the same time (voice goes through the Rev. A network, while data goes over the WiMAX network). Qik exclusively partnered with HTC and Sprint to bring 2-way video calls to the handset.

With that massive screen and aluminum casing, the EVO is not a lightweight smartphone. But, that works to its benefit. The heft actually give the EVO a bit of stability in the hand – and makes it more comfortable at the same time. It’s not a device for small hands, but if you’ve got the palm real estate, it’s one helluva device!

Take a look at the unboxing and let us know if you’re planning to pick one up on June 4th from Sprint for $199.99 with new 2-year contract!