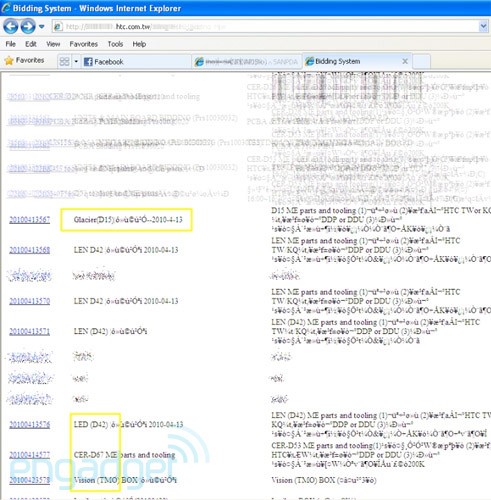 Two (possibly three) codenames of upcoming HTC devices have been dug up from an internal Taiwanese HTC site: Vision, Glacier and LED. I’m tempted to think LED entry is just the name of the actual part for each phone, but let’s leave that one alone for now. No hard specs are shown here, but it does seem like Vision will be coming to T-Mobile, and could essentially be a Desire with a slide-out keyboard according to some digging around UAProf files, but again, it’s in absolute rumour status for now. T-Mobile’s cooking a little something up called Project Emerald, which is supposedly something on par with the Nexus One and also made by HTC… Seems to fit the bill nicely enough.

The Glacier is considerably more cryptic and lacking in details, but for now, we at least have a name to keep an eye out for. We did hear something about a Mondrian, which may or may not have something to do with either of these phones. There was also that beast called the Scorpion from awhile back that we haven’t heard from – maybe it fits in here somewhere. It’s going to take a lot to tear people away from the Evo 4G or Nexus One with Flash, but there’s always something bigger and better. What would you guys like to see next from HTC?

The Galaxy S was shown off at the Google I/O this week, and it's definitely something to be admired. The...