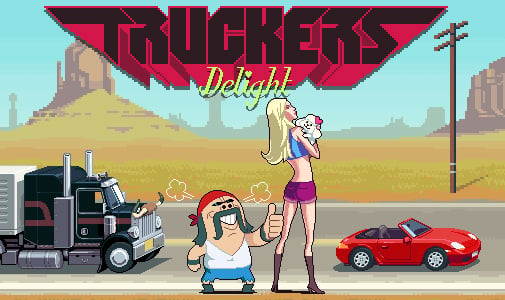 Ah, Truckers Delight (NSFW!). A simple little story about a trucker who goes on an adventure to fornicate with a beautiful woman in a Corvette. During his travels, he eats poodle poop, makes a bouncer his bitch, and travels through the poop shoot of a giant woman. All in the name of love and with an 8-bit art style and musical soundtrack by FLAIRS.  If you thought this uniquely vulgar animation should have been made into a game, then you’re in luck as Mobigame has created such a game for the iPhone.

Truckers Delight: Episode 1 has players playing through the first portion of the Truckers Delight animation where you take control of Jack driving his 18-wheeler in pursuit of Jessica as she drives in her Corvette.  The gameplay is reminiscent of old-school games like Chase HQ & OutRun. Jack needs to drive in and out of traffic to ram the back of Jessica’s Corvette using the iPhone’s accelerometers.  As you progress through the game, traffic becomes more dense and a number of additional obstacles will try to stop Jack from reaching Jessica.  Power-ups will pop up every so often which offer various powers that can boost Jack’s speed, ram through everyone on the road with huge bull horns, and lick the hell out of random whores on the road. Best of all, you can share your score via Twitter & Facebook Connect to show off how much of a hardcore Truckers Delight player you are.

Regardless of the overly vulgar subject matter the game is based off of, Truckers Delight does offer a solid game experience that I’m sure most gamers would enjoy. And for $3, it’s easily a game I’d recommend.

In a not-so-surprising move, AT&T has apparently confirmed to its employees that Apple will indeed be launching their much anticipated...