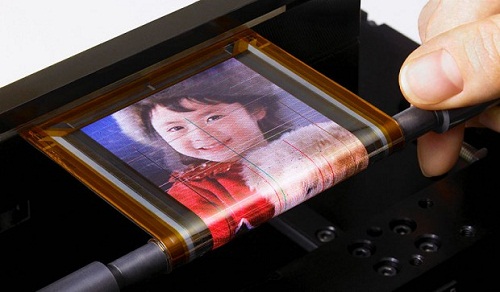 Sony showed off an ultra-thin, flexible OLED (organic light-emitting diode) screen that could dramatically change how our phones and mobile computers look.

The screens are about the size of a human hair (about 80-micrometers thick) and it can continue to display video while being bent around a 4-mm cylinder. This prototype is the first of its kind, Sony said, and it is expected to pump out 432 x 240 pixels at 121 pixels per inch. It also has a contrast ration of 1,000:1, Sony said.

This is just a prototype, so it will be a long time before it comes to mass-market products that will be affordable to more than just Scrooge McDuck. This could be the fruits of a new production method we spotted a while ago, and I’m excited about the possibilities this type of screen offers.

By and large, phone designs haven’t dramatically changed due to screen technology. Sure, the iPhone’s success has led to a wave of full-touch slate devices, but beyond making that screen bigger (like with the EVO 4G), we haven’t seen much innovation in the industrial design. Sony’s next-generation display could lead to wild form factors for phones, as well as fulfill the promise of wearable computers.

Check out the video below for an example of the next-gen OLED and let us know what type of form factors you’d want from a new phone.