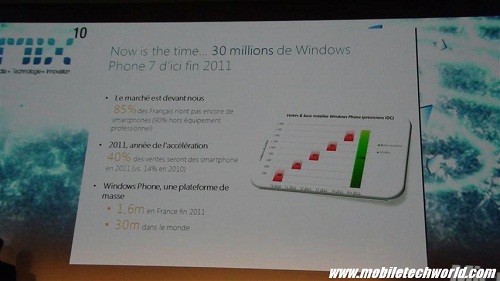 Microsoft is aiming high for its upcoming Windows Phone 7 operating system, as the software giant predicts it will sell at least 30 million devices with the OS by the end of 2011.

During its ReMix conference, the company laid out its lofty ambitions for its upcoming smartphone OS. It expects 40% of the phone sold next year will be smartphones and it is hoping to grab a large percentage of that. For comparison’s sake, Apple has sold a little more than 50 million iPhone since the introduction of its first smartphone.

Why is Microsoft so bullish on its mobile software? Well, it kind of is impressive. The company radically revamped the platform and ditched compatibility with the tens of millions of Windows Mobile devices in order to produce a new OS with a new user interface.

One of the things I like most about WP7 is that it ditches an app-centric approach for a more integrated, holistic UI. There are multiple “hubs” that will tie into online service and apps and be the center of your mobile experience. These will be dynamic too, so your contacts hub will show off friends who have recently updated their statuses or contacted you. Check out the embedded video at the bottom of the post for a detailed demonstration.

Like the Kin phones, the WP7 devices should be good cloud-centric phones. I’d expect some form of photo and video backup to appear before too long and you’ll likely be able to use Zune Pass for all-you-can-eat music for a monthly fee.

The crazy thing is that Microsoft may not be too far off with its predictions, as we know LG, Samsung, HTC and Dell are working on WP7 devices. The devices should have strong appeal to business and casual consumers, and I’d also expect these types of phones to wind up on most of the major carriers around the world.

Let’s see how good WP7 is when it ships later this year and we’ll probably have a better understanding of how it will sell.