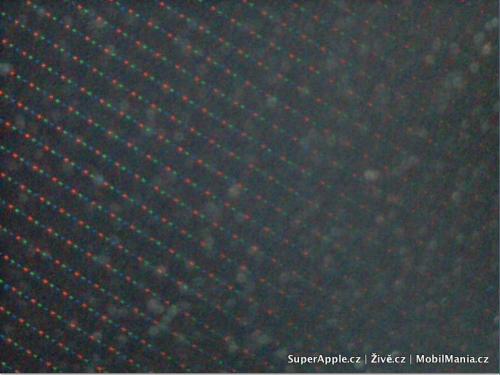 There’s no doubt that when Apple drops the iPhone 4G / HD / 4 on the world during the WWDC 2010 keynote next week, smartphone hopefuls will be lining up to buy the next-gen iPhone and its higher-resolution display. Today, we have confirmation that the iPhone 4 will sport an IPS-based LCD screen (the same kind that is used on the iPad) that packs in 960 x 640 pixels for a pixel density (DPI) that has yet to be achieved on any other smartphone. By taking count of the RGB elements of the new iPhone display under a microscope, we now know that the upcoming Apple smartphone has twice the number of pixels in both the vertical and horizontal directions.

Just how does one figure out the pixel count of an LCD panel? Well, you literally put the display under a microscope and count the number of pixels (each pixel is comprised of three sub-pixels – RGB for red, green and blue). Then you do some quick math to extrapolate how many pixels are present in a given length of the display. That’s exactly what Czech site superiphone.cz. These folks apparently got their iPhone-loving mitts on the next-gen iPhone display (or at least some components) and put it to the test.

After examining and counting the RGB elements, they found the density in both horizontal and vertical directions to be TWICE what we’re used to. Translation? We’re looking at quadruple the total number of pixels, giving us the rumored 960×640 IPS display at 320dpi. Insane. That makes the iPhone 4 the first smartphone to launch with a pixel density this high. The higher density should give the Apple phone’s display the kind of clarity that we’ve not yet seen in the mobile space, with almost HD-quality resolution.

That’s a lot of pixels. If this is indeed true… I want one. Now.

With Verizon blitzing all advertising channels with ads for the HTC Droid Incredible, it's no wonder that Verizon is having...