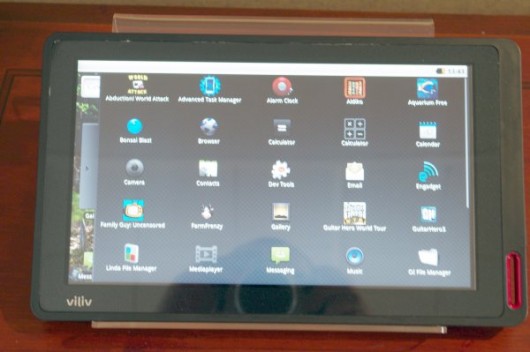 Awesome, there’s yet another iPad contender that we have no launch window for. The Viliv X10 (no, not that X10) is another Android tablet that boasts all kinds of features that bests the iPad. But, will that appeal to the masses, other than the nerds who are actually looking for great specs?

The X10 comes with a 10-inch 1366×768 capacitive touchscreen, an SD card reader, USB port,  HDMI port, front-facing camera, (expected) built-in accelerometer, 1080p video playback, and a battery that should serve up about 10 hours of usage. The is also said to really perform when it comes to intensive graphics consumption. The best thing about the tablet, in my opinion, is that by the time it’s released it will be running Android 2.2, and that means Flash support. There’s also a Windows 7 version of the tablet as well, but really, who cares about that?

While the tablet was displayed at Computex, we still have no idea when to expect its availability. This is really what’s somewhat irritating about these upcoming Android tablets. The only device we are expected to see in the near future is Dell’s Streak, and it’s really not much more than a slightly bigger smartphone. There have been tons and tons of Android tablets shown off at shows, but none have materialized yet. Let’s hope this changes with the X10.

If I were to make my dream tablet, the specs would read quite similar to the Viliv, but with the Pixel QI transflective screen that we’ve seen on Notion Ink’s Adam. I know it sounds crazy, but I’d definitely size down the screen as well. With a 10 inch screen, I wouldn’t mind an extra pound or two to hold a keyboard, that’s why I think a 7 inch tablet is perfect. Not too big, not too small, and definitely somewhere in between the screen size of a smartphone and netbook.

So what would be your perfect tablet if you had the chance to make one?

If you're like us, you're probably hoping for a quick resolution to the Gulf Oil Spill and want to use...