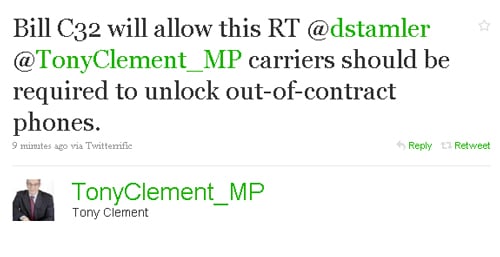 Woah, didn’t see this one coming. Today, the Canadian government has been chewing through some new digital copyright laws that would basically institute the DMCA of the U.S. north of the border. Although the most direct result of it will be a lot of online pirates grumbling about being held legally responsible for breaking digital rights management protective measures on music, movies, and software, there will be one upside for the cellular world, according to member of Parliament Tony Clement. By default, most GSM phones are built to work with one carrier, which folks circumvent with SIM unlocking. The law would, at first glance, make it illegal to pick the digital lock as one does with third-party SIM unlocking – after all, it’s just another kind of DRM.

I don’t have bill C-32 in front of me, but I would imagine there is a provision for products that are rightfully paid for, including cell phones. A three-year contract is obviously one of the purchase conditions, but once that’s up, there’s really no legal reason why a carrier should be allowed to keep a digital lock on a phone. As a result, Clement is here confirming that Canadian carriers would have to unlock our phones after the contract period is up.

Given, I think most carriers would offer to unlock a handset once a contract is up (with a little arm-twisting, of course), it’s good news that with Bill C-32, they would be obligated to do so. AT&T has begrudgingly offered to unlock pretty much anyone’s phone, regardless of contract status, but that took a class-action lawsuit, and applies only to one carrier. What we have here is a far-reaching bill that could affect a lot of wireless customers (especially ones eager to switch carriers). I had talked with an MP awhile back (not Tony Clement) about another act, Bill C-555, that proposed to ban locking altogether, but I don’t think that ever got anywhere. C-32 is a good start though.

Did the HTC Droid Incredible just get rooted? Nope.

To gets our hopes up, someone impersonated a developer to say that they have successfully rooted the HTC Droid Incredible....