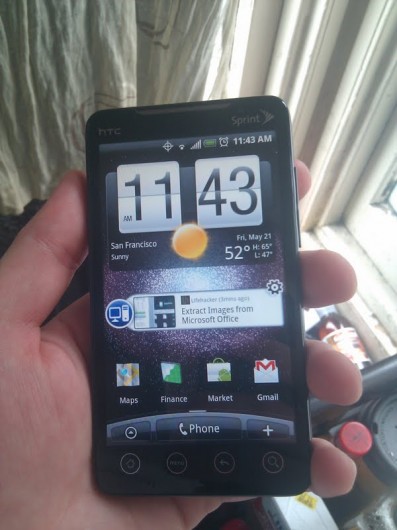 As expected, the much-lauded HTC EVO 4G is now available on Sprint for $199.99 on a two-year contract. With WiMAX connectivity, a monstrous 4.3″ touchscreen, Android 2.1 with HTC’s most excellent Sense user interface improvements, it’s hard to say no to the EVO 4G.

Be sure to check out our HTC EVO 4G review for the full low-down, but here’s The Short Version: 8 megapixel camera with autofocus and flash, plus secondary front-facing VGA camera for video calling, mobile hotspot function, Wi-Fi, GPS, 1 Ghz processor, FM tuner, HDMI out, and the aforementioned 4.3″ 800 x 480 display, WiMAX, and Android 2.1 with Sense. The HTC EVO 4G is by far the cream of the Android crop right now, despite its understandable battery issues.

The eager beavers have probably already picked an HTC EVO up from RadioShack, and if you’re feeling adventurous after getting your own, you can get your root down right away. Personally, I still find the 4G label a little misleading (it’s technically a 3G technology) – hell, even T-Mobile thinks it can get away with calling HSPA+ 4G. To be fair, WiMAX is still pretty freakin’ sweet, clocking in at theoretical speeds of 10 Mbps (real-word tests have it closer to 3-4, which is still pretty good). With such a massive screen and lightning download speeds if you happen to be in an area with WiMAX coverage, the HTC EVO is a media handset to be reckoned with. WiMAX coverage continues to expand, just recently finding its way to Boston, and coming to plenty of more regions in the U.S. over the summer. The EVO 4G will be a rare breed too, since Verizon, AT&T, and most major carriers are gunning for LTE right now, making WiMAX set for obsolescence within the foreseeable future.

Still, it’s here now, so might as well enjoy the WiMAX while it lasts. To pick up your HTC EVO 4G, you can sign up at the Sprint website.

Remember back in March when we showed you the S7, Huawei's first Android tablet?  From what looked like just another...