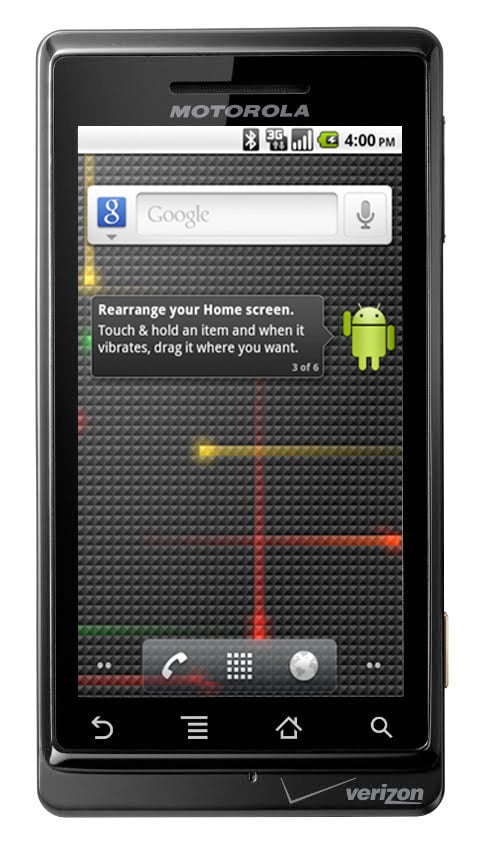 Have you been waiting on pins and needles to get Android 2.2 OS “Froyo” in your Motorola Droid? Well, today, your patient wait is unofficially over. We’re excited to announce that the good folks at MyDroidWorld have graciously put together an Android 2.2 ROM for you to use! The Froyo port is now ready to bring native USB tethering and support for Flash Player 10.1 to your Verizon Droid in a strictly unofficial capacity.

To be clear, Motorola and Verizon have yet to officially release a Froyo ROM for the Droid. This particular 2.2 port is basically a hacked-together version of the oven fresh Android OS build – which totes along a new JIT compiler for faster operation, boosted Javascript performance, supper for Flash 10.1 and native tethering. Unfortunately, all that hackery couldn’t get WiFi enabled with this ROM. If you install it on your Droid, don’t expect to hop on any WiFi networks – you’ll likely also miss out on the native WiFi Hotspot feature built into Froyo (which is why we only mentioned USB tethering above).

On the upside, if you decide to go ahead and beat the curve by installing this on your Droid, you’ll be enjoying SuperUser privileges right out of the box. That’s right, the ROM comes pre-rooted and ready to be modded any way you see fit. Whether or not this is enough of a perk to get you to give up WiFi is totally your call. Remember, you’ll always have 3G data access to pull down wireless data.

The other option, if course, is to wait for Motorola to get Android 2.2 OS Froyo officially ported to your Droid. But, given how long it took the smartphone maker to push Android 2.1 OS out to users, we wouldn’t expect to see an official Froyo update anytime soon.

[Update2]
There is now a more functional version of Android 2.2 OS “Froyo” for the Motorola Droid. You can find that new Froyo ROM here. No need to bother with the ROM below.

[Update]
And a very welcomed update, at that! You know that bit we mentioned earlier about the Droid’s unofficial Android 2.2 Update not supporting any WiFi connections? Well, a new patche has surfaced, and it fixes that little WiFi issue. It didn’t take long for the just-released Droid Froyo ROM to gts its first patch, now did it?

There’s more. The WiFi-fixing Droid Froyo patch comes in a handful of flavors. Each version sets your CPU clock speed to a different setting, allowing you to manually force the CPU to run at 800 Mhz, 900 Mhz, 1000 Mhz, 1100 Mhz, or 1250 Mhz. That’s impressive.

With Sprint launching their HTC EVO 4G today, we expected to see a rush of Android fans vying to put...