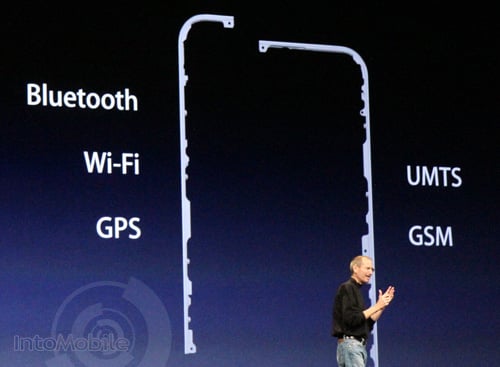 One of the juicier little bits of info about the iPhone 4 that Steve Jobs dropped today was that the iPhone 4 uses its stainless steel frame as cellular and WiFi antenna, much like the way the iPad was confirmed to be using its LCD frame as the antenna for its WiFi and cellular radios. You may have missed the mention of the frame-as-antenna during the keynote, but we thought it was a seriously cool feature that will push smartphone innovation to yet another level. So, what’s the big deal?

Well, it all has to do with how slim the iPhone 4 is. The new Apple smartphone is just 9.3mm thin. That’s as thin or thinner than a No. 2 pencil. In order to get the iPhone 4 that thin, though, Apple needed to find innovative ways to shave of precious millimeters from the device’s waistline. The microSIM that everyone loves so much was one way to save space. The other, decidedly cooler way Apple saved space within their smartphone was to turn the frame into a radio antenna. Rather than take up volume within the phone’s body to house GSM/3G (UMTS), WiFi, Bluetooth, and GPS antennas, Apple decided to turn the already-there stainless steel frame lining the sides of the device into a couple giant antennas (see pics above). That’s cool.

What does this mean for you? Well, you can expect to see future smartphones becoming thinner and thinner as they incorporate radio antennas into the body of the phone itself. You can also expect the new iPhone 4 to have superior cellular reception, because the antenna is essentially located on the outer surface of the handset. That’s going to be a big plus for iPhone hopefuls on the fringes of their cellular network.

All in all, the iPhone 4 is looking like it’ll be another innovator in the smartphone space. Did you expect any different?

iPhone 4 and the New Retina Display: What’s the Big Deal?

Normally when Apple uses words like "magical" and "revolutionary", I roll my eyes. So much of what they do has...