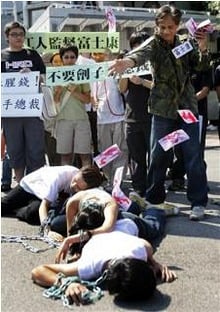 Unless you’ve been living under a rock, you should be pretty familiar with what’s going on at Foxconn, maker of the iPhone, these days. Working conditions and wages have been rather poor and it has been attributed to a recent string of suicides. It got so bad, in fact, that Foxconn made its workers sign promises not to kill themselves. As part of incentive to stay alive, for a lack of a better explanation, Foxconn also decided that it would give its employees a 20% pay increase. Of course, that money doesn’t just come from thin air.

With all the bad PR, unrest from investors and thin margins, the manufacturer is hoping to pass off costs to its customers. Although that might not happen any time soon, further causing its value to take a downhill dive, it might be a good option in the future. At least companies like Apple, whose products are manufactured at Foxconn, are offering a little incentive and chipping in quite a bit for relief.

Meanwhile, at a meeting with shareholders and investors in Hong Kong, Foxconn was greeted by a number of protesters who were holding up signs that read, “Workers are not machines. They have self-esteem.” Apple, being a high-profile Foxconn customer, was also targeted by the picketers in the protests and had images of Steve Jobs with horns and signs saying, “Bloody Apple.”

Overall, things could definitely be better for Foxconn, but its efforts are being met with resistance and its options are growing slim as employees grow weary. But in order for companies like Apple and Dell to make our gadgets at the costs we’re accustomed to, the costs for the manufacturers can’t go up much higher or they will ultimately be passed onto us. Would you pay more for your toys so that laborers like the ones at Foxconn, the laborers putting your toys together, can have a better quality of life?

Whether or not you're an Apple fan, you've got to admit that Steve Jobs sets the bar for what an...