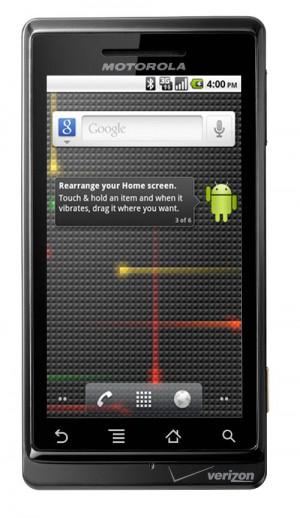 Some of you may be enjoying the leaked Froyo ROM on your Motorola Droid right now, but some of you may want something other than a ROM that was hastily thrown together. Well, for those of you in the latter group, you’ll be happy to hear that a full Froyo build has been released for your root-flashing pleasure.

This is a newer version of the Froyo version that was released this past Saturday. This latest Froyo ROM is loaded with the stock Android kernel, which allows for overclocking to 800Mhz, no need for a patch. WiFi also works without needing to flash a patch on top of the build as well.

The guys behind this Droid Froyo ROM have obviously been working really hard on this. Still, this isn’t a Froyo “port.” This is a legit build made specifically for the Motorola Droid, and while the official update has yet to be pushed out from Verizon, this is the closest thing to the real deal that you can get at the moment.

You do need to have root to get this working. Previous builds from Droid-Life did not have root enabled, but this build comes pre-rooted, so you won’t have to worry about losing root after you flash. And, they’ve generously prepared a backup for you to restore in recovery mode.

However, if you do happen to lose root, there is a patch you can flash to get it working again. If you had flashed the previous build from Droid-Life, you won’t need to wipe your data or cache, but if this is your first attempt at getting Froyo on your Motorola Droid, a factory data reset is required.

With the official update coming down the pipes for your Droid possibly just a few weeks away, you may want to wait it out. But there’s really nothing like the Froyo experience out there, and if you’re not in the mood for waiting, flash on brother, flash on!

So will you be waiting for the official Froyo update from Verizon, or will you give this stable Froyo build a go?

For instruction to get this up and running, you can hit up the link below, which also has a link to get root if you’re a complete n00b to this.

A while back, we showed you how to get pre-themed HTC keyboards on your Nexus One or Motorola Droid if...