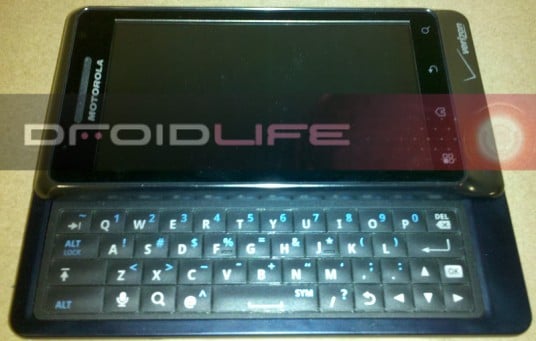 If you’ve been keeping up with the Android space in any sort of way, you’ll probably have heard that Motorola is preparing their unannounced Motorola Droid 2 as the more powerful follow-up to the successful Android-powered Verizon Droid. And, you’ll probably be interested to see what the rumored smartphone looks like. So, it’s a good thing that we just stumbled upon spy pics of the Verizon-bound Motorola Droid 2 showing off its slide-out QWERTY keyboard in all its glory! It looks a lot like its predecessor, but packs a wallop with more powerful internals and an updated version of the Motoblur UI.

What’s surprising to see here is that the Droid 2 seems to be an almost identical twin to its older brother, the Droid. The “lip” along the original Droid’s chin makes a return appearance on the Droid 2, but seems to have been refined for a more sleek look. The slide-out QWERTY keyboard also looks similar to the original Verizon handset, but sports slightly raised keys and ditches the D-pad altogether. The battery cover is likewise similar to the original design, only without the little fingernail insert.

So, what’s the big deal about a Droid2 to looks damn near the same as the phone it’s supposed to replace? The beauty, in this case, lies within. The new Droid2 features a 3.7-inch capacitive touchscreen, a 750Mhz OMAP processor, 5-megapixel camera, 3G data, WiFi, GPS, 8GB of onboard storage, 8GB bundled microSD card, and that refreshed keyboard. It’ll come out of the box with Android 2.1 OS, possibly Android 2.2 OS. It’s also supposed to be skinned with a refreshed version of the Motoblur UI.

What’s missing? The HDMI-out port that we saw on the Motorola XT720 is conspicuously missing on the Droid 2. It’s not like we expected it to have an HDMI-out port, but the lack of the port is worth a mention. It’s also worth noting that the Xtreme‘s (X‘s) 8-megapixel shooter also fails to materialize on this upcoming Motorola Android phone.

Here’s the Droid2 booting up on video:

So, what say you? Is the Motorola Droid 2 a worthy successor to the original? Do the specs you see above meet your expectations? Let us know in the comments below!

The T-Mobile Samsung Behold II might be all about having a high-quality camera and impressive AMOLED display, but it sadly...