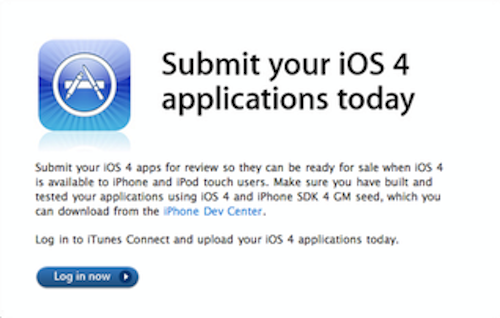 That’s the sentiment that Apple has just expressed through emails to its iPhone developers today, as it called for all devs to start submitting their iOS 4 (formerly known as iPhone OS 4) apps for the iPhone AppStore. The call to action comes a couple weeks ahead of the iOS 4 and the iPhone 4 launches, which will be staggered apart by a few days.

As Apple mentioned during the iPhone 4 keynote at their WWDC 2010 conference earlier this week, the iPhone OS brand is no more. From here on in, Steve Jobs wants us all to refer to their mobile operating system as the “iOS.” The idea, said Apple, was to make the platform device agnostic – seeing as how the iPhone OS was powering the iPod Touch and the iPad, Apple thought it made more sense to strip the “iPhone” part of the name out of the brand. The move echos Microsoft’s decision to wholly rebrand their mobile operating system as “Windows Phone,” both going forward and retroactively.

With the iOS 4 launching officially on June 21st, Apple is hoping to make a big splash with apps that can take advantage of iOS 4’s ability to run multiple apps in the background – multitasking, as it were. iOS 4 also allows apps to directly access hardware on the iPhone 4 (like the front-facing camera), which opens up the possibility for socially-connected or augmented reality games the likes of which we’ve yet to see. Add to that the super high-res Retina Display, and iOS 4 could see some truly impressive apps hitting the iPhone 4 in a couple weeks. But, in order for Apple to offer these news kinds of apps to early adopters, they need to fill the AppStore with apps that can take advantage of the new iOS 4 feautures.

So, Apple is asking all iPhone devs to get their engines started and start submitting iOS 4 apps to the iTunes AppStore. We’re hearing that Apple is fast-tracking iOS 4 app submissions and side-lining non-iOS 4 apps. So, if you’ve got a cool new app idea, you’re better off making it iOS 4 compatible so that you get priority approval on your app.

Wanna Sell Your iPhone Before the New One Comes? Try Gazelle

The iPhone 4 launch is just shy of two weeks away and you're looking at your iPhone 3G or 3GS...