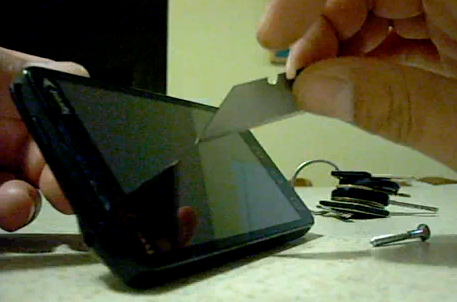 While we might not get the luxury of seeing if it handles a drop test as well as the iPhone 4, one HTC EVO 4G owner has shown us how well the screen handles loose change, keys, razors and screws before he had to ship it back to Sprint. The problem that the EVO 4G was getting sent back for was some screen peeling along one of the edges, but at least it takes scratches like a champ. Much like the iPhone 4, I would imagine that the hardness necessary to resist such punishment would also translate to a brittle structure, unable to handle harsh and sudden impacts. Phones with plastic protective screens, though more susceptible to scratches, are less likely to shatter. The Gorilla Glass found on the Dell Streak still seems to hold the gold standard for both durability and shatter protection, in any case.

If you haven’t had a chance to take a close look at the Sprint HTC EVO 4G, we’ve got an extensive review, with pictures and videos. It’s basically the cream of the Android crop, packing a 4.3″ WVGA display, 8 megapixel camera with dual LED flash, HDMI-out, Wi-Fi, GPS, 3G, and WiMAX connectivity. A 1 Ghz processor and 512 MB of RAM keeps it snappy, and Android 2.1 with HTC’s Sense user interface provides all the bells and whistles. As snazzy as it may be, the battery life suffers for having such a big screen, and WiMAX coverage is still limited across the U.S (although growing).

Still, if you’ve been thinking of picking up a Sprint HTC EVO 4G, you’ll be able to rest assured that the screen can take a beating after watching the video below. The EVO 4G is on sale at Sprint for $199.99 on contract and after rebates, so go ahead and grab one – we certainly couldn’t blame you.

Make sure to check out our Sprint HTC EVO 4G review here!

If you've been waiting to get your hands on the Bell HTC Legend, your wait may almost be over... But...