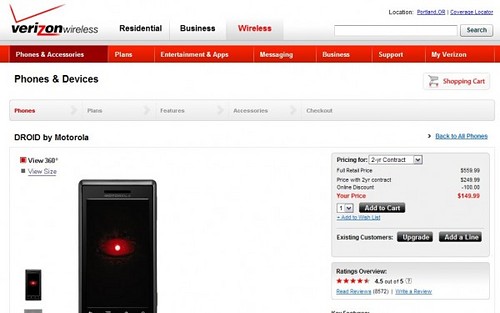 We were wondering when the Motorola Droid was going to get a little price drop by Verizon, and it looks like today is it. With so many more handsets, like the Droid X on the way, it’s no surprise that the little price adjustment is being made to clear out stock. Initially going for $199.99, you can snap one up from Verizon now for just $149.99, or $50 less the cost of the original retail price.

Of course, you’ll have to sign two years of your life away to Verizon and fully commit to that $350 early termination fee if you change your mind after 30 days. Perhaps you can alleviate some of your worries by picking up a Droid from Best Buy instead, where you’ll only have to fork over $99 under the same terms and conditions.

Let’s also not forget that the Motorola Droid is running Android 2.1, and since it doesn’t have a custom UI like its little brother, the Devour, it will be getting 2.2 (Froyo) pretty soon. As a matter of fact, plenty of folks have already injected the slick new version of Android onto their Droids the past few weeks.

INQ, the plucky little British manufacturer who has to date launched three social-centric phones based on Brew (the Chat, the...