Remember the massive security breach that plagued iPad 3G owners on the AT&T network just last week? The one where 114,000 e-mail addresses and ICC-IDs were compromised? The security issue where even the FBI got involved and to see if there was any wrongdoing? Yeah, that’s the one. Apparently, AT&T decided it would be appropriate to send out an apology to those who were affected – not that it stems any concerns or anything, but we’re sure it’s a welcome sign to show that the carrier does care.

AT&T’s VP of public policy and Chief Privacy Officer Dorothy Attwood sent an e-mail to those affected to explain what happened and how the security hole was patched within hours of its discovery. While this was all big news and a pretty big deal, it seemed like the hack wasn’t all that dangerous unless the info fell into hands that had a lot of time on them.

Does AT&T’s apology seem like too little, too late? Or was this an honest mistake and an honest apology? Either way, I sure do hope those iPad 3G owners feel a little better about this whole thing so they can just get back to enjoying their magical devices. Check out a full copy of the apology below. 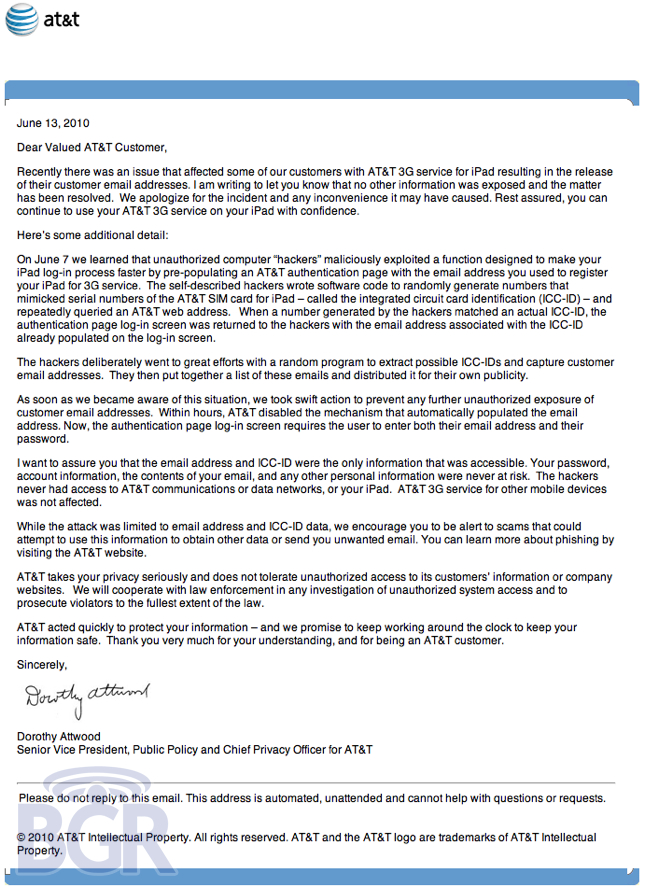 The Mobile Roundup – Did you hear about the iPhone 4?

Unless you've been living under a rock, you know that Apple finally introduced its next smartphone this week and the...