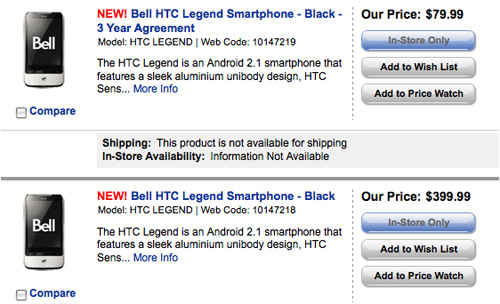 Over the weekend I brought you up-to-speed with the latest developments on the HTC Legend in Canada. The Legend is now up and very available from Virgin Mobile Canada from $79.99, and Bell is said to be launching the device this Wednesday (June 16th, mark your calendars).

We probably could have put money on this… Best Buy has already launched the Bell HTC Legend, a few days before the official launch. We’ve seen this before, and me thinks a pattern of sorts is developing here. You can almost count on it. Check it, next time Bell is gearing up for an official launch, keep an eye on Best Buy. Almost guaranteed, Best Buy will throw the device up-for-grabs, a day or two (or more) before the Bell launch. If nothing else it’s a great ‘coming soon’ notification for us, letting us know that yes, the device IS coming to Bell, just wait a few days!

For more information, head on over to Best Buy… Remember though, you’re going to need to pop into a Best Buy location to pick one up. They aren’t available for purchase online just yet… I have a sneaking suspicion that will change on the 16th!

The Android-powered Samsung i5800/i5801 that we've seen few days ago is now confirmed to be heading to Orange UK. It's...