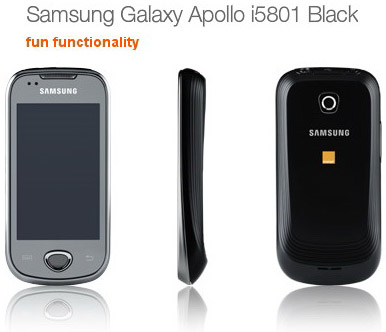 The Android-powered Samsung i5800/i5801 that we’ve seen few days ago is now confirmed to be heading to Orange UK. It’s the latter version (i5801) that will be carried by the France Telecom-owned operator and sold under the Galaxy i5801 name.

The device appeared on Orange’s website and from the page we learn the plan is to give it away for free to anyone interested to commit on a contract.

As you may recall, the Galaxy i5801 comes with a 3.2-inch touchscreen, 3G and WiFi connectivity, 3-megapixel camera with auto-focus, Bluetooth, microSD memory card slot and an array of “standard for Android” pre-installed apps.

Orange will sell the black version of the device, though the front face is grey. Exact release date is unknown, and all we have is “coming soon,” whatever that means.

In addition to the UK, I would expect that the new Galaxy smartphone hits other European countries in no time as well. First, we may see it across other Orange markets and then, who knows – other carrier groups may pick it up as well.

Popular customer support solution provider Zendesk is "going Android," allowing customer service representatives to answer questions even while on the...