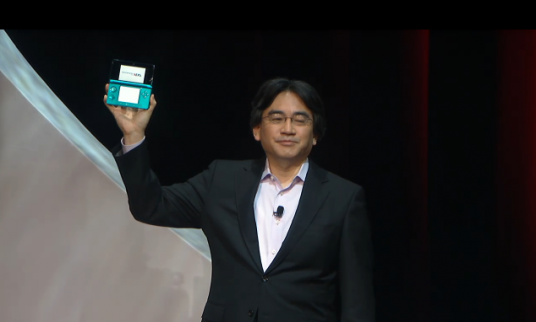 During Nintendo’s E3 press conference, it was revealed that they would be jumping into the 3D gaming scene with the Nintendo 3DS. The Nintendo 3DS will be the first 3D consumer device that doesn’t require 3D glasses in order for them to function. The Nintendo 3DS comes with a 3.5″ widescreen display on the top and a smaller touch screen on the bottom and will also include a slider which can maximize the 3D effect, disable it, and anywhere in between.

The Nintendo DSi was the first Nintendo DS to come equipped with not just a front facing camera, but also another one facing outwards. The Nintendo 3DS will now include a second outward facing camera that will allow the 3DS to take 3D photos, which is a first for any handheld device on the market. The 3DS will also come equipped with both a motion sensor & gyro sensor, which will give developers the ability to offer new gameplay experiences to Nintendo 3DS owners.

The Nintendo 3DS is said to have improved graphics over the Nintendo DS and number of big name publishers have already jumped on board to supply games for Nintendo’s new handheld gaming device. Notable video game developers such as Capcom, Konami, & Activision will bring their successful franchises (Resident Evil, Metal Gear Solid, & DJ Hero) to the Nintendo 3DS. Nintendo also unveiled its first Nintendo 3DS title, Kid Icarus: Uprising, which brings back the old-school fan favorite Kid Icarus in his first title since the original title debuted back in 1987. A new Nintendogs game was also teased to bring both dogs & cats to the 3DS, but no other information was given.

Not only does the Nintendo 3DS have a strong support from video game developers, but from big name Hollywood studios as well. The Nintendo 3DS also allow its users to download 3D movies to the device, including films from Disney, Warner Bros., and Dreamworks to name a few.  Unfortunately, no price or release date were revealed.

If you use Shazam for your Android phone now, then its time you saw the light - the superior SoundHound...